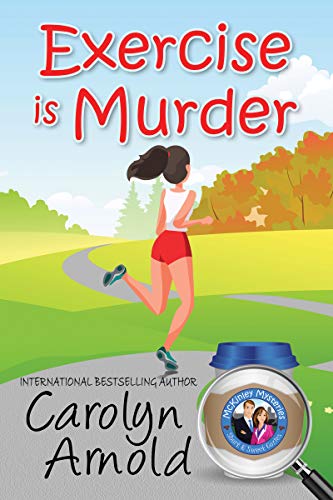 No pain no gain

Exercise is Murder is the newest in the ongoing Cozy mystery series by author Carolyn Arnold. Following the adventures of Sean and Sarah McKinley’s “Pay it Forward Investigations” the couple takes on the case of a fitness enthusiast who was found floating in the Hudson River. While the local police are quick to close the case as an accidental death due to a jogging accident, those closest to the victim are not so sure. After an impassioned plea from a close friend of Sara’s, the couple agrees to forego their already top-heavy workload and take on the case. But with a suspect list ranging from a prominent sports figure to a mousy schoolteacher, the duo has their work cut out for them. Factor in a prickly medical examiner and a touchy investigating officer on the legal end and the team at Pay It Forward finds themselves walking a thin line between solving a case or possibly bruising pride. While they want to solve the case at hand, they do not want to burn any bridges that their time as local police officers have afforded them. The further they dig, the more it seems that murder was the case.

Exercise is Murder is the third book that I have read to date by Carolyn Arnold and I must say that each book has been vastly different from the other. While I have noted that some authors tend to stick to the one main genre that they excel in, Arnold does not fit this mold. Whether it be the heart-pounding adventures of “The Secret of the Lost Pharaoh”, the gritty, suspenseful police procedural offering of “Shades of Justice” and now a light, but no less interesting “Exercise is Murder” Arnold has proven yet again to be a master of several genres. Having the major characters of this series as not only a married couple but also ex-police officers provide a very unique dynamic that works well. As the duo continue to work professionally with their old colleagues on the force in a capacity that I can only imagine may not always be welcomed by those on the force there is a rapport and playfulness that adds to the charm of the series. It is these quirky relationships and characters that is one of the main reasons that I enjoy a cozy mystery now and then and after having read Exercise is Murder, I would be very interested in delving into some of the McKinley’s earlier cases. While this is the 12the book in this series, the books appear to also work beautifully as their own stand-alone story which is a plus if you are just discovering this cast of characters as I am. If you are a fan of Cozy Mysteries or mysteries in general, this would be a great read for you.