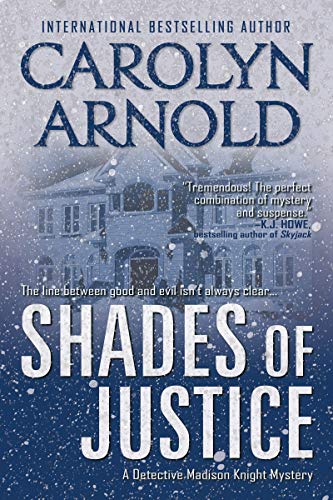 Full disclosure, I was provided a copy of this book by the author, however, have voluntarily chosen to write a review.

Shades of Justice is the Ninth in the Detective Madison Knight crime series by author Carolyn Arnold. As the story unfolds, Knight is called to the scene of a double homicide at the home of a very prominent family.  While on the surface this appears to be an affair gone wrong, Knight is not so sure.  Cracking this case will be more difficult than most as due to the family’s status and financial position within the Stiles PD “discretion” in the eyes of her superior quickly turns into a restrictive investigation where he every move is not only dogged and monitored by her superior, but also the attorney for the family. Madison and her partner really have their work cut out for them as they try to balance discretion with duty and close the case.  If that weren’t enough, with her best friend’s wedding scheduled in a few days’ time,  she also has  “maid of honor” duties on top of police work. Toss in the usual stress and drama that comes with planning a wedding and if this case doesn’t kill her, Bridezilla may.

While I have only read one other title by Carolyn Arnold, this is my first in the Madison Knight series, and I must say that I am impressed. While most “series” type novels tend to have a running thread that ties all the books together at times it can feel like coming in at the end of an inside joke if you haven’t read all previous titles.  Even though there are eight previous books in the series, Arnold does a great job of balancing the back story with the current narrative; only revealing past details that are relevant to the story currently being told. This works well not only to get the new reader up to speed quickly but it also keeps the those who may be actively following the series engaged and not bogged down in rehashing ancient history. I loved how the story moved fairly and with really felt as if events were happening in real time; less like I was reading a book and more like I was watching the events unfold on the screen.

If you are already a fan of this series, this installment will not disappoint. Also, of you like police procedurals as a genre and are looking for something new to try, I would recommend Shades of Justice.