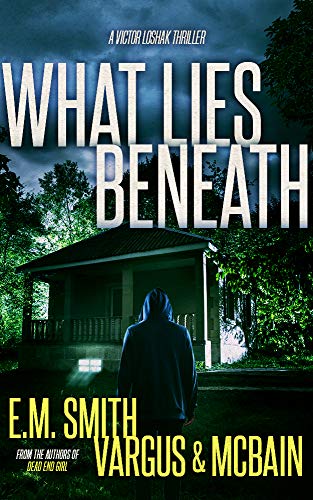 Scratch the surface, reveal the dirt

In an affluent suburb of Kansas City, a serial killer strikes. With several bodies already discovered, Agent Loshak is called out to consult on what appears, on the surface, to be just another run of the mill serial killer murder case. After he and Spinks settle in and meet the local PD, he receives a mysterious message that ultimately leads to a person who can provide possible insider perspective in the otherwise tight-lipped upper-class echelons. When even these efforts are thwarted, Loshak realizes that there may be more to this case than what is presented. As more questions arise and go unanswered, Loshak is stumped, until a survivor appears that potentially has information that will break the case wide open. What Loshak discovers will challenge not only his skills as an agent but could also recalibrate his moral compass.

What Lies Beneath is the newest in the Agent Victor Loshak series by Tim McBain and LT Vargus in collaboration with fellow author E.M. Smith. Picking up not too long after “Beyond Good and Evil”, Loshak and Spinks continue their unlikely partnership as they travel to Kansas City.  Still acting in the capacity of consultant, Loshak is called in to assist several involved jurisdictions as they try to piece together anything that will help them catch their killer. But the profiler’s reputation precedes him, and he gains a few starry-eyed fans as well as the ire of the officer in charge. As usual, there is very little to work with as collectively, the victims all seem unrelated but Loshak knows that a common thread exists; that the victims have been chosen for a reason. Once the pieces slowly start to come together, he realizes that this case is way bigger than just one serial killer.  There is a justification behind the crimes and one that Loshak is finding it increasingly harder to disavow.

Although I really miss the Darger/Loshak combination, I am really starting to like this series as well. Loshak is becoming a fairly complicated guy, and it is good to see McBain and Vargus bring a certain depth to this character that may not have been apparent in previous novels. Spinks continues to add color and comedy with his random Illuminati outbursts. If these two become a regular duo, I can’t say that I would be disappointed. As usual, the killer’s point of view is also represented, and this is one aspect of many of McBain and Vargus’ novels that I like as it allows the reader to really get into the mind of the “bad guy” so to speak. What Lies Beneath to takes this concept a step further by actually providing a background and a storyline surrounding the murderer. Once I got to this point in the story, the killer quickly stopped being the bad guy for me and simply became Dylan. Dylan’s back story and the back story of those around him took center stage and what used to be a “good guy v. bad guy” story with all the usual players became tuned on its side. I truly have never wanted to see the bad guy get away so badly than I have while reading this book.

All in all, What Lies Beneath is another great installment in this series. While I am still hoping for a Darger and Loshak reunion in the future, I would also love to see Spinks finds a way into those novels as well. It will be interesting to see what is next for the duo in future books.