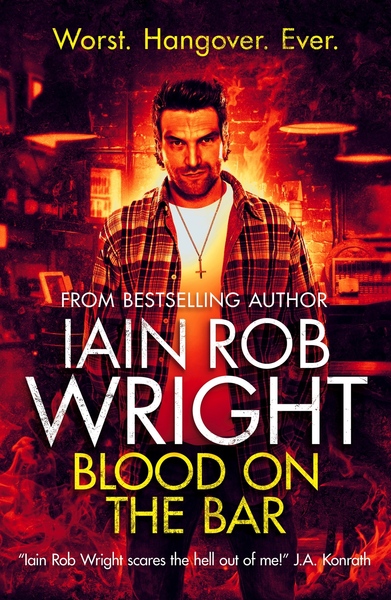 Blood on the Bar is the story of Lucas the atoner. While he appears to most as a suave Irishman who is not to be trifled with, Lucas is none other than Lucifer, who has been exiled to earth to live among the human population. Usually calm, cool and collected as he dwells among mortal man, one morning Lucas wakes up in the dirty back alley of a pub with no recollection of how he got there. As he tries to figure out what has happened to him, things go from bad to worse when it is revealed that a once forgotten adversary has returned to avenge an eons-old transgression. With his powers sapped and his mortal self failing, Lucas finds himself and several unsuspecting companions captive and fighting for their lives and souls as they attempt to escape the very depths of Hell.

For those familiar with Iain Rob Wright’s work, Blood on the Bar is a stand-alone novel, but the characters place this novel squarely in the “Damienverse” series of books. Lucas has appeared in smaller, but no less prominent, roles in several of Wright’s earlier novels, so it’s good to see Lucas in the spotlight as the focus of this story. The action in this one is fast and furious, and I guarantee that if you are not totally hooked by the end of the first three chapters you must have your eyes closed! Wright weaves an amazing story of epic and biblical proportions that is full of surprises and will have you on the edge of your seat. Whether you are new to Iain Rob Wright’s work or a long-time fan such as me, you will be captivated by this newest offering.