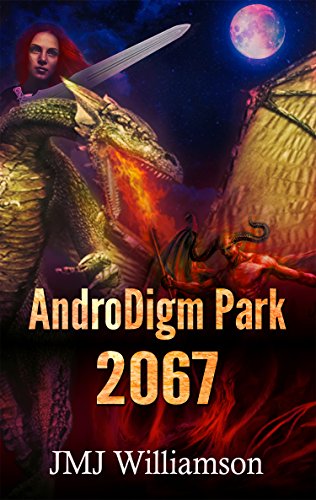 The year is 2067, and the centennial anniversary of the “summer of love” is in full swing. The world is as hedonistic and bereft of morals as ever before, and why not? Advancements in technology have ushered in the era of androids so life-like the rich and twisted are using them as their personal playthings and corporations are starting to replace their human workers with replicants. As more and more jobs are being taken by these life-like automatons, activist groups are rising up to fight back against technology that they view could end the human race as a whole. When the CEO of AndroDigm is attacked and brutally murdered at an Action Against Androids rally, her daughter enlists the services of bounty hunter Marshal Shelby to track down the persons responsible for her mother’s death who have seemed to have dropped off the face of the Earth and all tracking systems. To make matters worse, the pair has also fallen under the ire of an organized crime boss who will stop at nothing to get retribution.

JMJ Williamson’s newest novel could probably best be described as part Blade Runner, and part Westworld. Angel city, where most of the action unfolds, is a futuristic metropolis full of heli-cars, and nightclubs where anything goes and usually does. Big corporations rule the day, and organized crime has found a foothold in many illicit operations. Shelby is a bounty hunter still trying to recover from the murder of his wife and daughter. With this pain still fresh and their killer still on the run, the last thing he wants is to be saddled with another person to watch out for. Keeping himself and his android sidekick Jess safe is enough without having a strung-out sex worker in tow. Little does he know, that appearances aren’t all they seem and “Scar” from Lucifer’s Pleasure Cave turns into more asset than liability as the story wears on.

I really loved the concept of this book, especially AndroDigm Park, where you can do anything and be anyone, for a price of course. While I would like to have seen more in the AndroDigm Park segment of the book, what we did get was pretty amazing stuff. Williamson’s imaginings for this playground for the rich and powerful was nothing less than genius.

The narrative is set in the not too distant future, and Williamson adds in technological features that are already in use in some areas as well as those that are still just fanciful ideas in such a way that made Angel City truly come alive for me. But even with the future setting, there are still many modern-day issues at the fore, which leads the reader to believe that no matter how advanced we become as a society, there will always be political activists, corrupt public officials and organized crime syndicates.

If you like your noir, hardboiled and warped into the future, AndroDigm Park 2067 will be a great title to check out. This is a perfect blending of current issues and future tech that you will not want to put down and will leave you wanting more.