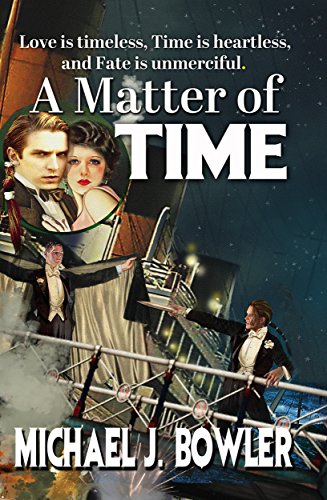 A Time Travel adventure for the ages

A Matter of Time, by Michael J. Bowler, is a time travel mystery with a dash of romance that is all good. Set in the mid-eighties shortly after Titanic has just recently been discovered by Dr Robert Ballard, Jamie starts having disturbing dreams. The further the dreams progress, the more he is convinced that somehow, he is linked through time with Jack Philips, who was a Marconi operator on the doomed liner. When the dreams take a shockingly vivid turn, the more Jamie realizes that an ancient evil once also stalked the decks of the liner and that Phillips was one of his last victims. After Jamie starts craving blood and develops an aversion to light he concludes that in order to save himself, he must attempt to travel back to that fateful night almost a century ago to confront and destroy the vampire.  Armed with a fantastical notion and a determined spirit, Jamie sets out to the North Atlantic to hitch a ride on the famed liner with two days to spare. Whether he succeeds in even jumping time to Titanic is one thing, but once faced with the knowledge that he can avert the entire disaster, will Jamie stop at just his initial mission?

It is a pretty well-known fact that I am a huge Titanic freak and have been obsessed with the ship and her stories ever since I was a young child. In times past, that used to be a blessing and a curse as I was very critical of anything that was not historically accurate and had a really hard time suspending my belief where Titanic-themed fiction was concerned. I would like to say that as I have gotten older and more mellow, I tend to take the stories for what they are – another chance to go back a relive a portion of history that has affected so many. With that being said, when I was contacted by the publisher with an opportunity to read and review this title, I jumped at the chance and I was not disappointed.

Set in a time where the world was just rediscovering Titanic and her stories really provided with Bowler a lot of room to focus less on the history and more on the story he was crafting. But that is not to say that the history was lacking, as it was not. Having Jamie travel back in time and end up walking the decks of the doomed liner was a great premise and consisted of the bulk of the story. Watching Jamie interact with several famous names and personalities all with the knowledge of their ultimate fate was an added tension that was palpable at times. On several occasions, the reader can feel Jamie’s dilemma as he struggles with altering time and history and leaving the timeline unchanged. Add in an unexpected romance with a passenger and her young son and an already good story becomes great. To say that A Matter of Time checked all the boxes for me for a timeless story that I will read again and again is pretty much an understatement.