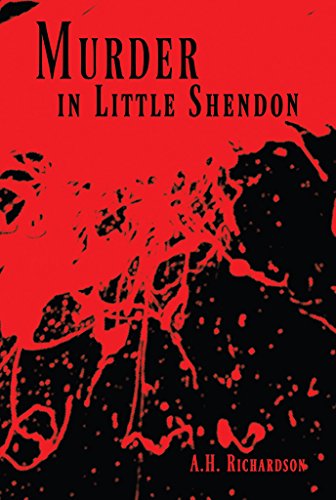 Murder in a small town

In the small village of Little Shendon sometime after the first war, a local shopkeeper is bludgeoned to death in his store. The event has shaken up the town, set everybody on edge and given Police Inspector Stanley Burgess a ton to work with; so much that he has enlisted the help of two longtime friends to help sort it all out. Bartholomew Fynche, as it turns out, was not just the local proprietor of Little Shendon’s antique store, he was also a miserable little man who was not afraid to step on a few toes to get where he was in life. Unfortunately for Inspector Burgess, this makes pretty much everyone in the town a suspect including the American tourists staying at the local inn. With a suspect list as big as the town of Little Shendon itself, the inspector will need all the help he can get to close out this case.

Murder in Little Shendon is a very easy read that is part cozy and part traditional mystery. Set in a time in the not too distant past, author A.H. Richardson transports us to a small village where everyone knows everyone else’s business and very little escapes notice. That is until Bartholomew Fynche turns up dead and the entire town is set on edge. Sure, he was a miserable man who may have engaged in shady dealings and outright thievery at times, but who would be driven to murder? Suspicion abounds as the inspector and his amateur assistants attempt to unravel the mystery and bring the killer to justice. As far as mysteries go, the story had enough intrigue to keep me guessing as it seemed that there was not a person who may not have had the motive to off the poor shopkeeper. Toss in a second murder and the town that is walking on eggshells is all but ready to close shop and hide until the murderer is caught. As with all good murder mysteries, the culprit is revealed in such a way that will have you guessing right up until the very end. If you like a good mystery set in a distant time and place with a cast of characters as eccentric as they are suspicious, Murder in Little Shendon will not disappoint.