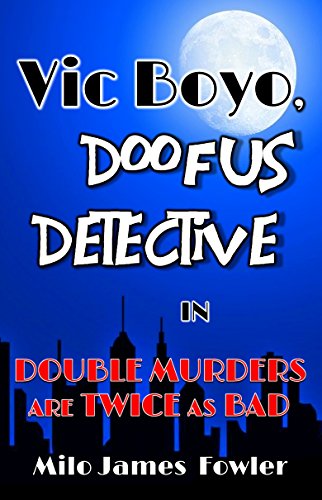 Full disclosure – I was provided with a copy of this book by the author, however, have voluntarily chosen to write a review. All opinions are my own.

Vic Boyo, Doofus Detective in: Double Murders are Twice as Bad is the newest book by Speculative Fictioneer Milo James Fowler. Set in the early 1930s, the story follows Police Detective Vic Boyo as he navigates the seedy underbelly of prohibition era New York to clear the name of a femme fatale accused of killing her husband. With all odds against him from the start, Vic is determined to find out who set up Maria Merryface. With the help of his secretary, Miss Oglethorpe and a mouthy street kid, Vic really has his work cut out for him; but time is running short and the line of goons chasing him seem endless.

I really love the Noir genre and while Vic Boyo is billed as a “screwball detective” novel by the author, there was still a noir vibe in spades! The overall feel of the novel reminded me very much of the classic gangster movies, but there was also a bit of Columbo or “Who Framed Roger Rabbit” thrown in as well. Vic is a bulldog when it comes to his cases and having a soft spot for the beautiful Mrs Merryface doesn’t help. From the outset and at every turn Vic was getting chased, shot at or worse and probably endured more in a couple days than the average beat cop ever would. With each new scheme or lead, there was also something to snicker at as our Doofus Detective unravelled the case that nobody wanted him mixed up in.  I really hope that this is the beginning of a series of novels with this character as I would love to see more of his antics in upcoming cases.