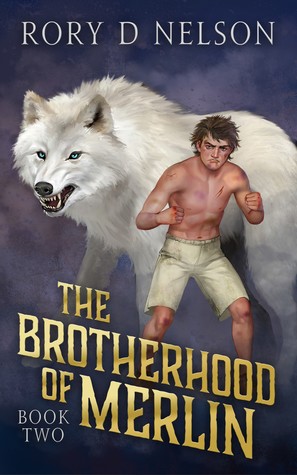 Full disclosure – I was provided with a copy of this book by the author, however, have voluntarily chosen to write a review. All opinions are my own. Lycenea is scheduled for November 17, 2018 release.

The new class of Brethren

Lycenea is the second in The Brotherhood of Merlin series by Rory D Nelson. The story picks up approximately six months after the end of the first book with Merlin and the Brotherhood returning home with Dante and Sylvia in tow. The newly orphaned duo attempts to settle into their new lives, but the transition is not without difficulty. For Sylvia, it’s the struggle to be able to trust anyone again after her trauma at the hands of King Jason. Plagued with extreme guilt and nightmares that won’t let her forget her recent past, Sylvia desperately needs Merlin’s help to overcome her darkness.

Dante’s situation is sort of a mixed bag as while he has the protection of the Brotherhood he’s also landed himself as the newest recruit in the academy run by the Brotherhood to train up the future of the Knighthood. Even with Dante’s disability, he is still expected to perform at the level of every other cadet and the slightest misstep could mean expulsion from the program and the loss of the Brotherhood’s protection. As it was with his mentor, Dante is determined to succeed, but as the year wears on, the tasks get more difficult and the recruits dwindle, it becomes apparent that Dante’s rival has been plotting for his expulsion.

If you have not read the first book in this series, I wouldn’t recommend reading Lycenea out of order. As I previously stated in my first review in the series, The Brotherhood of Merlin is less “Arthurian legend” and more “Arthurian Inspired”. The timeline of the book falls approximately 500 years after the fabled Knights of the round and the Knighthood has evolved to mirror the times. Merlin is less of a person and more of a title, but that does not make the current Merlin any less formidable. As part of the narrative for this instalment, Nelson provides us with a glimpse of Perronius’ early history as a youth slave in the Orachian mines. In this backstory, we can see certain parallels beginning to be drawn between Merlin and the Dante which explains their unique bond and sets up future events in the story. While not a short read at all, Lycenea serves as a solid second book in this series. Rivalries are developing, lines are being drawn and it is becoming apparent that for good or for ill, Dante is going to play more of a critical role in future events.

If you’re looking for a unique sort of fantasy that’s part Medieval epic, part Western, and incorporates a definite Arthurian element in the story, The Brotherhood of Merlin series may pique your interest. It’s only fair you warn you however that once you pick the series up, you may find it hard to put back down again.