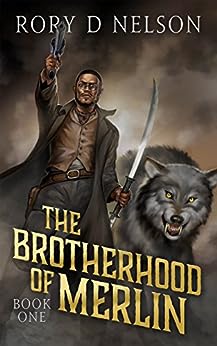 Full disclosure – I was provided a copy of this book by the author in exchange for an honest review.

Knights of the Round – 500 years later

The Brotherhood of Merlin is the first novel by Rory D Nelson and is a fast paced, fantasy adventure. There are actually two stories going on in this novel. The first one of Dante, a young boy who after witnessing his father’s mysterious exile and the slaughter of his remaining family finds himself alone in the wilderness with little hope of survival or rescue. The second, the tale of Adele and her sister, Sylvia who find their township overrun by King Jason’s army, their friends and family murdered and themselves and many others taken captive.  While the King’s army plunders the village, the King seeks to sell the remaining captives into slavery while having his way with Adele.  Vastly outnumbered by thousands, the Knights led by Merlin are adamant to reach their goal and rescue  the captives at any cost.  With the nearest reinforcements weeks away, Merlin and the Brotherhood embark on what can only be deemed a suicide mission as ten men attempt to take on an army of thousands to defeat Jason and liberate his captives.

I feel it’s only fair to highlight a few important items at this point. As the title suggests, “The Brotherhood of Merlin” is medieval at its core as it is based around the mythical Merlin and the Knights of the Round Table, but the Brotherhood is also much more. Nelson seamlessly blends the medieval aspects with more modern elements such as guns, grenades and heavier ordnance which make for some truly bloody and imaginative battle sequences. There is also a paranormal element with the evil sorceress Morgana and Renault the telepath. Each knight has a companion wolf that acts as partner and protector and we also see this relationship develop between the newly orphaned Dante and the Alpha female who comes to his aid.

This story cannot be described as “Arthurian Legend” but more “Arthurian Inspired” There is no mention of Camelot and the only mention of King Arthur was in a passing comment that would place the timeline of this story approximately 300-500 years after his death.

“Merlin” – is more of a title than a single person. In fact, the terms “The Merlin” and “Merlin” are used almost interchangeably.  The current Merlin has been re-imagined as the blind, humble former slave and current leader of the Brotherhood. Skilled in both sword and gun-play, he is a brilliant mathematician, and charismatic leader eliciting an unwavering loyalty from the Brotherhood while striking fear into the hearts of his enemies. Even though Merlin is portrayed as blind, he still comes across as a capable and cunning leader that uses his remaining senses to function as good as if not better than his sighted brethren.  Also, with the aspect of Merlin’s lack of sight coming into play, Merlin and some of the Brotherhood are skilled in Braille. This is also another element where we see the artistic license of fantasy come into play as Braille wasn’t invented until the early 1900s, but for those who can take this book for what is – a brilliantly crafted fantasy – this adds a new dimension to how Merlin can get under the skin of his enemies and communicate with his allies.

With that being said, if you’re looking for a fast paced, sometimes cringe worthy fantasy with modern elements and an evil bastard of a villain that will get under your skin and make you wish for his death then this book is definitely for you. “The Brotherhood of Merlin” is a strong first novel in a setting that is full of potential. I am looking forward to reading more about this world, Merlin and the Brotherhood. I’m sure it’s too early in the series to know yet, but I also have a few theories about Dante and I will be very interested to see how his story plays out as well.