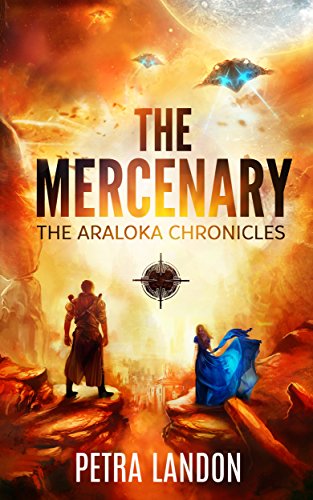 An intergalactic romance for the ages

The Mercenary is the first in the War Series by Petra Landon and tells the story of a young Budheya girl who has found her prison contract sold to a tavern keeper on a distant space station. Rather than wasting away in a Keetari prison on her home planet, Saakshi is serving out her sentence as a serving girl for Trader Pik. The hours are long, and the work is not easy, but Pik is fair and does not let his girls get unnecessarily harassed. It looks like Saakshi will be able to serve out her sentence in relative peace until the arrival of a Keetari spaceship to the station brings her face to face with her jailer. At her wit’s end and the urging of Pik, Saakshi seeks out the one person who may be able to help her. She’s seen the huge Had’Kor mercenary in Pik’s many times, always intensely watching her; but will her unorthodox proposition ultimately secure her safety or be her ruin? As they form an alliance of convenience, Saakshi can’t help but find herself drawn more and more toward the Mercenary.

I will admit that for as many books as I have read, I have historically shied away from the “Star Trek-esque” space type novels. I’m not even sure why. Maybe after having grown up right at the height of Star Wars, and also being a casual Star Trek and Doctor Who fan, I just found that topic to have been overdone with all the movies and TV series that I didn’t think anything new could be added to the genre. It is also well known that I am not a huge fan of romance, so when the author approached me for a review of The Mercenary there were already two strikes against it for no good reason other than my personal bias.

I am happy to say, that Petra Landon has proven me incorrect on both assumptions.

While the romance between Saakshi and Zoran was there and an element of the story, there was much more to the narrative than the sex. Also, with the scene being set in far-flung reaches of the galaxy with alien races and new technologies, the story worked to capture my attention, hold it and leave me wanting more. As the story unfolded and I learned more about Saakshi and Zoran, the more I felt a connection not only between the unlikely lovers but also with them and myself. There was one scene where I honestly felt a twinge of jealousy as it was revealed that a female friend of Saakshi had also been rescued by her Had’Kor mercenary. While there is a bit of closure for Saakshi and Zoran in this story, Landon has also left situations and a few characters open for future adventures as the War Chronicles are set to continue with the release of the second book in the series “The Starfarer” later this year. I, for one, am eager to revisit this world and learn more about the races, rivalries and yes even romances Quadrant 5 has on offer.