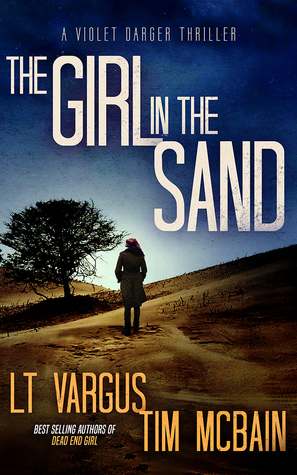 Full disclosure – I was provided with an advanced reader’s copy of this book by the authors but have voluntarily provided a review. All opinions are my own. The Girl in The Sand is scheduled for a March 22, 2018, release.

Face to Face with a Killer

The Girl in the Sand is the follow up to last year’s “Killing Season” and follows FBI agent Violet Darger and her partner Victor Loshak as she is called out to Las Vegas to assist her partner in a chilling discovery. Set in the old stomping grounds of Violet’s serial killer obsession, the bodies have once again started reappearing. While not unusual in a city where an average of three people goes missing on any given day, this new rash of departed bears many markings of the murders attributed Leonard Stump almost 20 years ago. As Violet investigates, she unearths several clues that would suggest that not only are the new killings indeed the work of Loshak’s old nemesis but that he may have gone “underground” all these years; hiding in plain sight while satisfying his murderous urges. Violet and Loshak set to undertake an operation that may very well head off the infamous killer but leaves both dangerously exposed.

The Girl in the Sand is the third full novel in the Violet Darger Series of novels, but if you count last year’s shorts, The Last Victim, and Image in a Cracked Mirror, this is actually the fourth time we have had a novel or a story related to this cast of characters.

As The Last Victim sets up Loshak’s presence in Las Vegas with him interviewing “the one that got away”, The Girl in the Sand continues that narrative as Leonard Stump resurfaces after two decades to continue his gruesome killing spree right in the face of a massive law enforcement operation to catch him and bring him to justice.

So, this is definitely an intense read from start to finish, and both Violet and Loshak find themselves in situations that could definitely be considered life ending. I can think of at least three instances where I found myself yelling at my kindle as a choice was made that placed one of the two characters in jeopardy. But, as is the case with these two, they run headlong into the melee without a thought of themselves. There is definitely closure for Loshak and Violet in the end, but there is also so much more than I can see to be done with not only this dynamic duo but also the slippery, sinister Leonard Stump in future episodes of this series. If you have yet to read the previous books in this series, you will still be able to enjoy this one without feeling lost, but if you want the full backstory then you should also check out the prior books Dead End Girl and Killing Season. I guarantee it will be time well spent.