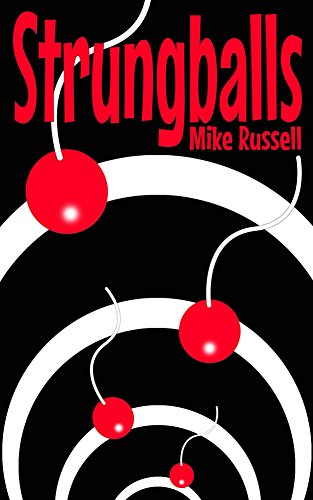 Full disclosure – I was provided a copy of this book by the author but have voluntarily chosen to write a review. All opinions are my own.

Strungballs is a short novella by author Mike Russell. In it, we follow a young boy by the name of Sydney as he undergoes a procedure to remove a square of flesh from his chest. After the procedure, his father presents him with a “strungball” which is a hard red ball on a string that is to be inserted into the newly created recess in his body. Upon receipt of his new prize Sydney is given the stern warning that once the strungball inserted, it can never be removed. In Sydney’s harsh utilitarian society his world is very ordered. All rooms in the city are the same dimensions, have the same color schemes and all look out over the same flesh toned life-force that engulfs his city and protects them from the “Others”, people who have chosen a life without strungballs. Sydney’s world is finite as well. In his circular world with all rooms numbered 1-999, Sydney can only go so far before he finds himself back where he was. All energy and work is expended for the good of the Sphere of Flesh that engulfs them. Sydney is content to continue his life for the good of the flesh until he meets an old man named Arthur who challenges Sydney to question the norm and ask the question that does not even seem to have been posed in his society; “Why?”

Strungballs at its core is Sydney’s pursuit of “Why”. Why do I need Strungballs? Why can’t I remove them? Why are we so afraid of the “Others”. It is also so much more. When Sydney ventures outside of his ordered society, he finds the world fascinating and terrifying, but he also finds an experience far removed from what he has experienced thus far that he knows that he must try to rescue those still in the ordered sphere of the city.

This is a small offering, coming in at a little under 70 pages, but the story conveyed is a definite thought provoker. As I read through and after watching Sydney’s reaction to the removal of his strungball, I felt like this could be an allegory about things we are addicted to in life and the discovery of what life has to offer once those addictions are broken. With so much going on in this short novella this is one that I will most likely re read in the future and get a different meaning from or notice something that I missed in previous reads. If you like your fiction weird, almost to the point of being disturbing and thought provoking. If you are a fan of dystopian worlds and stories that have a deeper meaning than what is on the surface, Strungballs will be a good read for you.

One thought on “A review of “Strungballs” by Mike Russell””