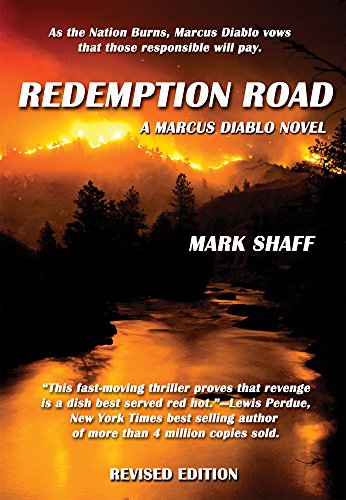 From Revenge to Redemption

Full Disclosure – I was provided a copy of this book by the author however have voluntarily chosen to write a review. All opinions are my own.

When Marcus and Annie Diablo took their sons on vacation all they were looking for was a little peace and family time in the forest. After Annie disappears under mysterious circumstances Marcus sets out to find her. What he uncovers is a terrorist plot to rival and surpass 9-11. When Annie is used as a pawn in that plot, Marcus vows revenge on those responsible, but his limited resources can only take him so far in his quest for retribution. He seeks out the assistance of an elite team of ex-military not quite mercenaries to assist in his take down of the organization responsible for the murder of his wife. As he unofficially goes through the grueling training needed to accomplish this daunting task, Marcus finds himself with a renewed purpose in his life beyond mere revenge.

Redemption Road is one of those books that will grab you within the first chapter and will keep you on the edge of your seat for the rest of the time. Marcus is a man possessed as he takes the fight directly to the men who kidnapped his wife. As more details are revealed about the scope of this attack and Marcus becomes even more focused on his revenge it is clear that his surname of “Diablo” is well deserved. Once he hooks up with Force Ten, the action is amped up to the extreme as the team goes deep undercover to accomplish their task. I don’t think that there was anything that I didn’t like about this book. I will admit that there were portions of the book that were a bit far-fetched, but even those worked together with the rest of the narrative to weave an amazing tale. Mark Shaff has created a protagonist that you can root for – a family man who will stop at nothing to ensure the safety of his children, even at peril of his own health and life. With Redemption Road as his debut, Shaff has made his mark in the literary world as a force to be reckoned with and on par with many other well-known authors of the Thriller genre. If you are looking for a fast paced, well thought out read that’s not quite like anything you’ve read before Redemption Road would be an excellent choice. I know I for one am looking forward to discovering what lies ahead for Marcus in the second novel in this series –  Force Ten: Doubling the Penny. If it is anything like Redemption Road was, I will be in for many late-night reading sessions.