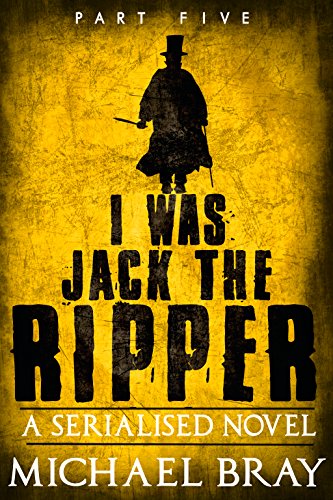 A Confession…. And a Cleansing

“I was Jack The Ripper” is the newest novel by horror/thriller author Michael Bray. While not a ‘factual account’ of the White Chapel Murders or the Ripper, it is a tale of fiction based on fact which allows the author more room for artistic license. Also, in the true form of the time-period and subject matter being covered, this is not a series that should be read by those who are easily offended.

The fifth and final installment in the tale takes us through the Ripper’s most violent act to date and his life afterward. Told in two major parts, with the first being a narrative view as Jack/Edward relays the details of the Mary Kelly case to Hapgood. This is typical of the style that we have seen throughout the installments and this portion of the book is about as gruesome as I would expect the actual murder scene to have been as great detail has been taken to stay as close to the Ripper Lore that is available. Upon completion of his narrative, Edward/Jack presents Hapgood with a journal of his life immediately after and in the years spanning the final Whitechapel murder and present day. Hapgood is made to read the journal in its entirety as Jack is loath to speak of the contents, but in those pages, we learn of what may have been as the Ripper emigrates to the United States in an attempt to start life afresh. The further Hapgood gets into the pages of this dark diary, the less he feels comfortable with his current situation. As the story draws to its inevitable denouement, Jack finds closure and a bit of absolution while remaining an enigma and the stuff of legend.

Having read this over the course of almost a year and a half, I am almost sad to see this series come to an end, but of course when your subject is one of the most notorious serial killers in history, there is only so much content to work with if you want to remain true to the legend. Released initially to members of his mailing list in early 2016, I was very pleased to see the series come to kindle this year. If you are interested in the story but don’t want to read the installments, Michael Bray is also releasing all five installments in a completed novel form later this month.

After having read through the Jack series in all its iterations over the last eighteen months I found myself going through a myriad of emotions. Michael Bray’s imaginings of Jack as a child, youth and young man plagued with all sorts of horrors and injustices that work to incite the inner demon to come to the forefront is an amazing story. Many times, I found myself physically sick at the tortures that young Jack was made to endure. The speculation of the Ripper’s early life and how it shaped his remaining days and his inevitable murders was not only genius but also plausible. If you, like me, have a curiosity of sorts with serial killers and Jack the Ripper specifically I highly recommend this series. Whether you read the separate installments over time like I did which really allowed for the me to mull over what was presented or the more complete novel to come, I guarantee you will not be disappointed.