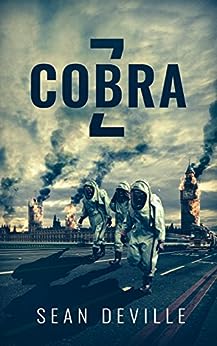 A plague engineered in a secret government facility is smuggled out and co-opted by a fanatical cult like sect. Released as a fast-acting plague on an unsuspecting nation, within hours, hundreds of thousands are infected. As the nation scrambles to contain the infected and locate the ones responsible, within a day, a country lies in a smoldering ruin, abandoned by all but the afflicted. Now the question remains – can this seemingly man-made catastrophe be contained before it spreads across the planet?

As the first book in the Necropolis Trilogy by Sean Deville, Cobra Z does an excellent job of setting the stage. After a brief prologue touching on the virus’ origins and disastrous accidental release in the “Hirta Island Disaster” the story jumps forward approximately one year in time to the release of the contagion and ensuing chaos it causes. The story from this point on is told primarily in real time snippets of action as we see the virus’ release, and spread from several different angles. First from the instigators of the attack, to the afflicted as they “turn” and spread the disease all the way to the situation room of the United States as a concerned Commander in Chief is briefed on the disaster and its potential impact on the States. Told also are the stories of a few scattered bands of survivors as they attempt to reach so called “safe zones” which have been designated for evacuation.

I think what truly made Cobra Z a stand out to me in what has become a fairly formulaic genre are the story lines told from the point of view of the infected. For as many ZA novels that I have read, this seems to have been an angle that has not yet been explored completely if at all. Not only does Deville explore it, but I think he does so in such a way that the infected start to become less of a “mindless monster” and more of a hive mind community dead set on global domination.

So, after what must have been the longest, most disastrous day for the UK, Cobra Z ends, but as we see in the closing pages this story is far from over. If the beginning of this story is any indication as to the rest of the series, I am looking forward to reading “The Contained” and the finale “Necropolis”.as I am sure they will be as fast paced, graphic and unique as this one was.