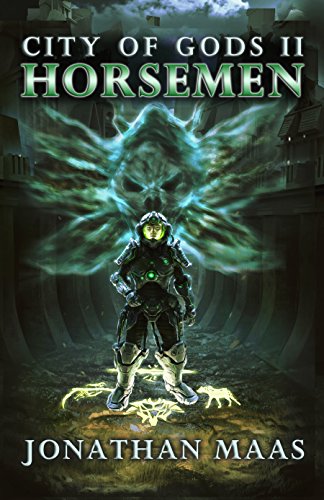 Full disclosure: I was provided a copy of this book by the author however I have voluntarily chosen to write a review. All opinions are my own.

City of Gods II – Horsemen is the newest in the City of Gods series by Jonathan Maas. As the year ends, the Horsemen each undergo specialized final exams tailored toward their strengths to close out their first year of instruction at the Academy. Upon successful completion of these tasks, year two immediately begins as the group learns that they will be sent on separate assignments. As each one receives their mission they discover that they will be scattered to the four corners of the Conurbation and provided a teacher/mentor and a team to assist in their quest. For some, this will be a fairly easy task– a fact finding quest, but for others it will be fraught with danger and may ultimately impact the future of the Conurbation and the Horsemen as a team.

While Horsemen started a little slow for me that actually worked to its advantage as it had been quite some time since I last read Hellenica. The slow start provided a way to ease back into the world of the Academy and to reacquaint myself with all the characters. Once the stage was set, the pace picked up, and it became clear that there was something strange afoot in the Conurbation. As I read I noticed that the story really hit its stride near the halfway point and it soon became clear that Horsemen is a transitional book in what appears to be a much larger vision and story by Maas and paves the way for more adventures in this world as the Horsemen continue to complete their assigned quests and grow into the icons they are destined to become.