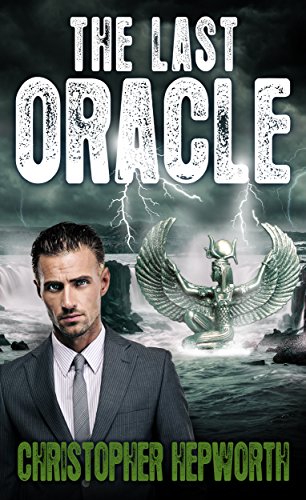 Full disclosure, I was provided an advanced copy of this book by the author however I have voluntarily chosen to write a review. All opinions are my own.

Politics, Terror and Treason battle with a dead religion in the newest Sam Jardine Thriller

The Last Oracle is the third in the Sam Jardine crime thrillers series of books by Christopher Hepworth. Set some time after the close of The Wulff Agenda, negotiator Sam Jardine has now joined the Daingerfield Oil company. Led by the often-brutal oil magnate Rex Daingerfield, Sam finds himself paired with his daughter Sienna in a bid for the fracking company to expand into renewable energy. Sam accompanies Sienna to Egypt as she resumes her post as the “Oracle of Sehkmet” while he is to head up the new solar division of Daingerfield. Aided by a beautiful, well connected executive, Sam attempts to keep the fledgling company afloat but learns that this may not be easy. When a group of engineers in his employ are attacked and annihilated by radical Islamic terrorists, Sam finds himself rescued and nursed back to health by the Oracle. While under Sienna’s care, Sam learns how close the Earth is to an environmental crisis and vows to help her stop it, even if this means opposing his employer’s fracking operations. As Sam undertakes this task he quickly learns that this will involve confronting terrorists, corrupt politicians and a shadow society all seeking to stop him to further their own agendas.

This latest installment in Sam Jardine’s world is packed with action from start to finish. While this is the third book in the series and having only previously read “The Sleepwalker Legacy” it was not hard to fill in any blanks that may have been found in the story along the way. Christopher Hepworth does a great job tailoring these novels to be read as either stand-alone reads or part of a much bigger series. In “The Last Oracle”, Sam finds himself in impossible situations and exotic places. As he traveled from the U.S. to Egypt, Greenland and Canada on his mission to stop an environmental calamity, Sam struck me as a modern day “Indiana Jones” with possibly a dash of “James Bond” tossed in for good measure. The addition of the ancient Egyptian goddess Sekhmet and Sienna as her oracle added an element of mysticism to the narrative that provided a perfect opposition to the extremist element that was also present. The further I got into this book, the more I wondered whether Sam and ultimately the Earth would survive. No matter what your views are on the current issue of climate change, “The Last Oracle” will provide a thrilling read that may leave you with a different perception than you initially had. After reading “The Last Oracle” it will be interesting to see what new ventures and adventures await Sam Jardine in the next chapter of this series.