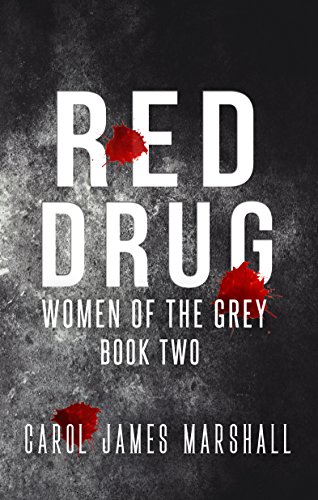 All the same, All Addicts

Full Disclosure, I was provided a copy of this book by the author, but have voluntarily chosen to write a review. All opinions are my own.

Red Drug is the follow up to Starburst in the Women of the Grey series of books by Carol James Marshall.  This second book follows three Women of the Grey in simultaneously occurring timelines.  Lisa has been returned to the Grey after her failed mission on Feline Street. Once back home she faces unimaginable punishment in the mysterious White and Black rooms. For all her wondering, Lisa finally knows where the “naughty” girls go, never to be seen again. Just when she accepts her fate as being different in a race of “none different”, Lisa is sent back out on another mission. She is to find a man and breed. As the Women no longer have the male of their species, they must use the next best thing to further their race.  Lisa finds herself dropped somewhere in California with the basics and a directive, but she is determined to defy the Mothers once again. Little does she know, one of the residents in her apartment complex has seen the Women before and is determined to get to the bottom of who Lisa is and what her kind wants.

Abigail is a strange duck. Living with her boyfriend somewhere in rural America, she is successful in her breeding mission and is currently pregnant with her little “thumbprint”. Unlike the painfully fastidious Mothers, Abigail prefers to spend her days barefoot with the feel of the earth and the detritus of the forest under her feet. As the child inside her grows, Abigail also notices an overwhelming and ever increasing, undeniable craving for blood. Is this natural or is she a disgrace to her race?

Teresa just wants to fulfill her mission, but after numerous attempts and countless months she is still not pregnant. It’s only a matter of time before the Mothers come to collect her, but what happens then? In the Grey where “all are the same and none different” will Teresa will be considered the same, or an abomination?

For as creepy as “Starburst” was “Red Drug” cranks up the creep factor times ten. As we follow these three very different women through their missions and their lives in various places around the country, more of the history of these mysterious creatures are revealed. Superior Mother definitely has her hands full with Lisa and finds that she can only protect her and the other Women of the Grey for so long before their true alien natures demand release. The further into Red Drug I got, the more sinister the Women of the Grey became and the more I wanted to know what would ultimately happen not only to Lisa but the Women as a race and the Earth.  Eagerly awaiting the release of Stainless Steel as I am sure CJM will once again blend Sci Fi and horror in what can only be a bloody good continuation of the Women of the Grey series.