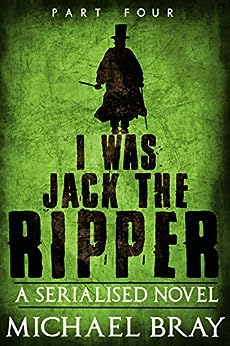 “I was Jack The Ripper “is the newest novel by horror/thriller author Michael Bray. While not a ‘factual account’ of the White Chapel Murders or the Ripper, it is a tale of fiction based on fact which allows the author more room for artistic license. Also, in the true form of the time period and subject matter being covered, this is not a series that should be read by those who are easily offended, as there are a few cringeworthy moments.

I have been eagerly awaiting installment Four since I first had an opportunity to read the prior three stories last year and I must say that Bray made my wait worth it. When installment Three ended, we were left with Edward/Jack summoned to the police station for an interview with Detective Inspector Abberline. Installment Four resumes with Edward and Abberline’s fated meeting. While thinking that he may be sunk, Abberline is merely interviewing all witness, especially those who may have been present at both scenes to date to determine if they have any additional information that may be helpful in catching the Ripper. Edward manages to escape this encounter unscathed, but something Abberline says pushes him further over the edge, making this meeting the catalyst to the Ripper’s brutality to date.

It’s becoming clearer to me that Edward must be suffering from Multiple Personality Disorder and it is this evil portion that takes over as the murders are committed. More and more we see him start to have a dialogue with his inner voice that causes him to slip further into his insanity. With alcohol seemingly being the only thing that keeps it at bay, Edward does what many people do when attempting to battle their demons… feed it. It is in this manner that he meets Mary Jane and although she represents the exact thing his inner demon is out to destroy, he is drawn to her. Stranger still, he doesn’t seem to be internally conflicted when he is around her.  As their relationship blossoms, the scene is being set for what can be argued as the most brutal of the Ripper’s victims.

There was a ton happening in this installment as the Ripper continues to relay his story to Hapgood. Installment five is coming in and it’s promising to be a good one. I am interested now to see if Bray leaves the Ripper narrative with the “canonical five” or if he continues to touch on some of the later unattributed crimes.