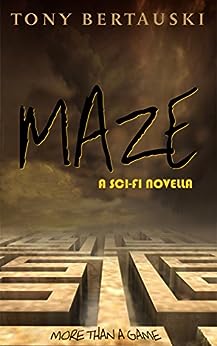 Maze, the Sci Fi Novella by Tony Bertauski takes the concept of virtual reality to a deadly level. As the prequel to his full-length novel “The Waking of Grey Grimm” which is included in the upcoming Dominion Rising compilation set, Maze attempts to provide a bit of backstory and set the scene for the broader story to come. Set sometime in the future, people have started exploring “awareness leaping”, a sort of virtual reality total immersion that is so realistic the users may not be able to determine fantasy from reality. Despite its criminal designation, the draw of awareness leaping is so strong that games have been developed as a sort of sport.  Imagine a huge online MMORPG that’s part “The Matrix”, part “World of Warcraft” with a little bit of “Quake” and “The Hunger Games” thrown in for good measure. The object is simple – be the first to escape. The winner receives riches unimaginable, the question is, will they be sane enough to enjoy it.

The story mainly revolves around a young woman named Cassidy as she is being interviewed by the police. With awareness leaping being outlawed, Cassidy has come under some suspicion regarding recent events regarding her Father. The action jumps between Cassidy in the interrogation room and an unknown participant in the Maze game while they navigate its numerous rooms. With the player entering and defeating literally hundreds of rooms we learn that they are winning. As each new realm gets harder to defeat, there is one common thread… another character named “Cass”. Is this person another player, the secret to victory or part of the Maze designed to throw the competitor off?

After having previously read “The Waking of Grey Grimm” as a Beta copy of the author I am already a little familiar with the concepts depicted in the story. If you are new to this story, however, Maze lays the perfect framework to understanding not only this novella but also the larger full-length novel which is to come. Bertauski has imagined a world that is just enough sci fi to be futuristic but not so out there that the reader gets a “that can never happen” vibe about the entire thing. In fact, this isn’t the first time a work, be it a book, movie or otherwise, has depicted a world where reality and fantasy can be blurred so easily. This nuance makes Maze stand out as a story that can be read many times and still enjoyed.