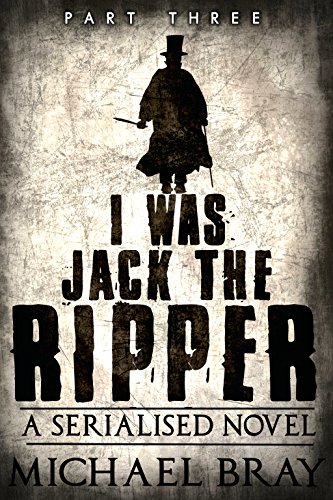 “I was Jack The Ripper “is the newest novel by horror/thriller author Michael Bray. Initially released as a test offering to members of his mailing list I have previously read the first three installments.   I was very happy to see this serial resurrected so to speak for Amazon. Jack, is a serialized account of the life of one of the world’s most brutal murderers, and one that will keep the reader interested.

The third installment is a continuation of Edward’s encounter with Mr. Hapgood as he endeavors to tell his side of the Ripper story.  Throughout the course of narration, we learn that the Ripper is terminally ill which explains the urgency of his visit. As the story continues, events are relayed of a few more of his earlier victims as our antagonist begins his gruesome work. The boldness of the Ripper is evident, as is the cruelty with which he goes about his task. However, boldness is not without consequence as Edward relays an early meeting with Detective Inspector Abberline which could very well have ended his murder spree before it got started.

Another quick, yet vivid and gruesome read. It should be noted that the author has revealed the first three installments were actually penned in 2011 with all installments going forward being written in the present. It will be interesting to see if this time lapse has any bearing on the storyline or writing style or if the spark that has been ignited in these opening episodes continues on unbroken. This month’s sequence ends on a “cliffhanger” of sorts as Jack/Edward has been summoned to the police station to provide a statement with regard to the most recently discovered murder. Next month promises to be ripe with insights into our antagonist’s psychological state during this time in his life. I, for one, am looking forward to it.