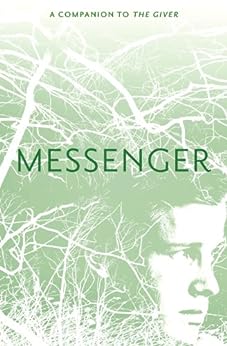 Messenger is the third book in the Giver Quartet series by Lois Lowry. Having previously read “The Giver” and “Gathering Blue”, “Messenger” sees the continuation of Matt (now Matty) approximately six to eight years after “Gathering Blue”. Having returned the blind man, Kira’s father, back to his village, Matt decides to remain with him instead of returning to his previous home. Over the years he has kept in contact with Kira and has visited frequently, but his pleas to have her join her father and him in Village are not successful as Kira feels that she still has much to accomplish in her home. Because of increasing unrest and concerns voiced by the inhabitants, the once open Village is closing its borders and it’s up to Matty to travel the ever increasingly treacherous forest to spread the word and try to get Kira to come with him before it’s too late.

I must say, this is by far my favorite book in the series. Not only did we have a continuation of the characters from the previous book, we finally get to catch up with Jonas and Gabe from “The Giver”. Lowry’s writing in this book conveys yet another village that is different from anything we’ve seen thus far and is by far the most inclusive and welcoming, until the Trade Mart turns the villagers’ focus more toward themselves than others. When this occurs, a poison seeps into the community and the surrounding forest that may result in more than just closed borders. Jonas has found himself in a position of influence in the community however that influence can only go so far.

I tore through this book is less than a day and the ending, while not unexpected ripped my heart out. If you are not an emotional wreck by the end of this story, you must not be human. I am looking forward to the final book in this series to see how Lowry ties all if these different yet similar dystopian communities together.