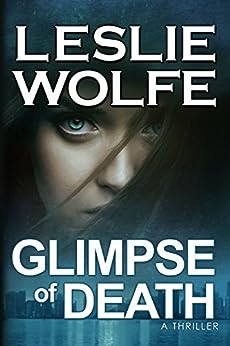 No Rest for the Best

“Glimpse of Death”, the newest book by Leslie Wolfe, is the third in the series of novels featuring FBI Special Agent Tess Winnett. With the dust still settling from her last case and still recuperating in the hospital, Agent Winnett is approached by Palm Beach County Detectives Fradella and Michowsky for insight into their newest case. A missing persons case has turned into a murder investigation as the victim has been found in her own backyard. Naked and posed seductively, the mystery deepens when the victim’s husband mentions that she saw a man holding a coiled length of rope in their backyard shortly before her disappearance. The more details are revealed, the more the Detectives feel that they may have stumbled upon a serial murderer.  With her hospital room turned into an adhoc office, Tess does what she can to steer the team in the right direction; but with bodies being discovered at regular intervals Tess is at a loss as to who the perpetrators are. When an acquaintance joins the ranks of the abducted, Tess needs to kick her investigation into overdrive if she is to solve the case and rescue the remaining victims.

The time frame for this newest case is almost immediately after the close of “The Watson Girl”; but if you haven’t read the preceding books in this series, do not let that dissuade you from diving into this one! Glimpse of Death is excellent as a standalone novel as well as part of the larger picture of the series. Glimpse opens with the protagonist heroine down for the count, having undergone emergency surgery to repair the damage done, but evil never sleeps. Tess Winnett is also not a character to lie languishing in a hospital while there are bad guys to be caught, and I believe that her assistance in the case did more to speed her recovery than rest and relaxation could have. In solving murders and catching the bad guys, Tess finds purpose and possibly a catharsis that helps her deal with her own traumatic demons.

There is so much that I want to say about this book, but I don’t want to give anything away. The action is immediate and nonstop, and just when you think you have it all figured out, Wolfe tosses in a twist so masterful that it’ll make your head spin. I have thoroughly enjoyed all the books in this series, but I must say that “Glimpse of Death” has raised the bar on the “police procedural” genre for me. As I am still mulling over certain scenes and events in this book days after my completion, I am sure this will be one of the few novels that I will use as a litmus test for others titles I read in this genre for a long time to come.