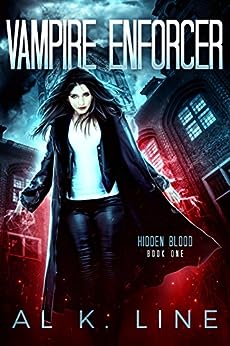 Full disclosure, I was provided an advance copy of this book by the author as part of his “A-Team” but have voluntarily chosen to write a review. All opinions are my own.

Vampire Enforcer is the first in a new urban fantasy series by Al. K. Line. While the series may be new, those familiar with the “Dark Magic Enforcer” books will have no problem getting into the Hidden Blood series as it involves all the usual suspects. Taking place shortly after the close of “Wild Spark”, Faz and Kate have returned from their eventful honeymoon in Paris. While Kate has her newfound hidden powers, Faz is still recovering from the sickness of magic use, and this recovery looks to be a lengthy one. So, with the hubby laid up, weak as a kitten what’s a Vampire to do?

The city is going crazy. Hidden of all manner have lost their cool, their fear if you will and if the situation isn’t contained it could spell major problems for all Hidden. Dancer needs his best Enforcer to bring this situation under control, but Spark is out of commission so Dancer recruits Kate as the first ever Vampire Enforcer. Kate’s seen Faz in action before and knows how crazy these enforcer jobs can get but still she’s intrigued. How hard can it really be? Especially for a newly minted hybrid magic using vampire?

“Vampire Enforcer”, true to the other enforcer books in the previous series, is action packed and full of twists and surprises. With all the usual creatures and characters involved it was very easy for me to jump right into the action. While this book does heavily piggy pack off another series, “Vampire Enforcer” can still be read as a standalone novel without the reader feeling as if they have missed too much of the back story. For those who have followed Black Spark and the gang through the last 8 novels in the Dark Magic Enforcer series you will not be disappointed in what is basically a continuation of the series with the focus on another character. Kate finds herself in all sorts of weird situations from goblins, to demons and a strange carnival ride called “The Obliterator. All in a day’s work.

I loved this book! With the focus being off Faz and more on Kate I’ll admit I wasn’t too sure how I would take to it, but there should have been no worries. Kate makes a total transformation in this book and I must say it suits her. Getting a glimpse at just her, learning just a bit of her backstory and how she copes with what she’s seen and done helps to understand how she ticks. I also love the idea of the Vampire Enforcer sort of thing as it’s never been heard of and can be quite effective given the Vamps specific talents. If I thought Mithnite was coming into his own in “Wild Spark” his story continues in an epic way in Vampire Enforcer. The questions that I had at the close of the previous book were answered in spades. It was also good to see Dancer get into the action and mix things up with the Enforcers and the issues instead of just dictating jobs from the relative safety of the office as the Heads have previously been prone to doing.

Where do the Hidden inhabitants of Cardiff go from here? We can only wait until the next book is released. Hopefully, Kate will make good on her dinner invite with the Chemist , I can see very interesting….almost hilarious things happening.