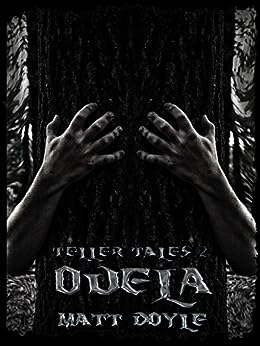 “Ouela”, the second in the Teller Tales series by Matt Doyle, continues the story of Simon Teller approximately two months after the events of “Basille”. In the months that have passed, Simon divides his time between the real world and Xera’s realm, however he is finding less and less satisfaction with life in the physical realm. All his efforts and interactions in the physical realm seem to be lacking, including those with his best friend, Daniel. Simon doesn’t have time to dwell on this however as he is summoned yet again to  Xera’s world. Carrie says that Xera has a new game set up for them, but this time the game master is not Basille, but an ancient tree type creature called “Ouela”.  Joined by David, a fairly new player named Jesse, and an enigmatic masked character known only as “Anybody”, the team is whisked on an intergalactic adventure of reconnaissance in deep space. A large space station has lost contact with a vessel enroute and needs the team’s assistance to figure out what may have happened. As the game progresses, it becomes clear that Ouela’s intentions are far more sinister than their previous game master. With the set rules turned into a bunch of moving targets, the team are trapped in a “no win” situation with little choices.

Ouela jumps the reader directly into the action and is pretty much nonstop until the final pages. Opening with Simon and Carrie in a gladiator arena of sorts, this is a different type of game designed to hone the players’ fighting techniques and gives us our first glimpse at the enigmatic Anybody. Ouela is an unusual sort of overlord; one who uses and abuses both his ‘pets’ and unsuspecting victims alike. Since he does not take animal form like Basille and Xera he strikes me as something more dangerous because one does not know just how deep or far his roots stretch.   I loved the Star Trek meets space odyssey aspect of this game and being a Sci Fi fan it was no stretch for me to imagine both the V2 Talon and the eerie ruins of the Lightway. ELISA is classic “Space Odyssey” – the unshakable disembodied voice that communicates with the human inhabitants of the Talon.

Compared to “Basille”, “Ouela” is a bit darker thanks to the manipulations of Ouela and the wraithlike yet cunning Anubis. However, even with that being said this book would be perfect for the Young Adult and the mature reader alike. After reading Ouela, I am strongly considering letting my son read the series as part of his school’s summer reading assignments. There is action and adventure told in a manner that does not invoke foul or questionable language. In fact, after giving him a brief synopsis of both books in the series, he is now eager to read them as well.

I would recommend this series to anyone who is a gamer of any kind, who loves science fiction and fantasy involving unconventional areas and even weirder characters and for those who want to lose themselves in a well written adventure. I am looking forward to the remaining books in this series to discover what new inhabitants of Xera’s realm we will meet next as well as what crazy fantastical scenarios await the players.