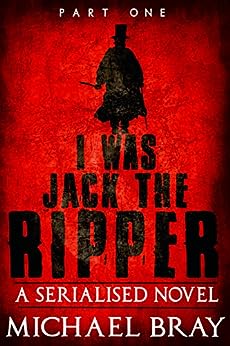 The following is an edited and reworked review of “I Am Jack – Installment 1” that I initially posted in March 2016. This updated review also appears on Amazon and Goodreads.

The Ripper as you have never seen him

“I was Jack The Ripper “is the newest novel by horror/thriller author Michael Bray. Initially released as a test offering to members of his mailing list I have previously read the first three installments.   I was very happy to this serial resurrected so to speak for Amazon. Jack, is a serialized account of the life of one of the world’s most brutal murderers, and one that will keep the reader interested.

The first installment sets the groundwork of the story, where we find Jack – now using the pseudonym Edward Miller calling upon an author currently in the process of writing about the White Chapel Murders with a request to tell his story. After an initial refusal, the author agrees upon learning Miller’s true identity. Jack’s story begins at the pivot point of his life and we learn of the chain of events that turned a once happy boy into one of the most brutal serial killers of all time. These events also served as a bit of foreshadowing into the mind of the Ripper with regard to how and why he chose his victims.

I got a little bit of an “Interview with the Vampire” vibe in this opening installment but I’m fairly certain that all similarities will end there. The story told thus far was shocking and at times heart wrenching but also left me feeling for our victim turned monster.  Since little to nothing is known about the actual identity of the famed serial killer, Bray provides a unique “what if” that sets the stage for the reader and provides a plausible history for Jack.

Having read Part One a second time, I still feel that his is a great start to what I know is going to be a unique look into the life of The Ripper. I am excited to see this serial play out and read all that Bray has in store in his account. I am sure that once complete, this will be a series that I will return to from time to time to binge read.