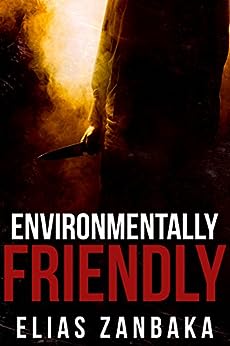 Full disclosure – I was provided a copy of this short story by the author however I have voluntarily chosen to write an honest review.
Man versus Nature

The short story “Environmentally Friendly” by Elias Zanbaka can really be described as a snippet in time; quite possibly an excerpt from a much larger piece that has not yet been revealed. The story opens with a seemingly mad man rampaging through the streets of LA with a chainsaw and a flame thrower. As the story progresses it becomes known that the man, a military veteran by the look of him, is attempting to trigger an environmental crisis by provoking the Earth.  The entire Los Angeles Police Department is after this man, the “target” as he is called however one officer wants to see the mission complete. Sargent Shaffer has an unorthodox plan to allow ‘the target’ to complete his mission however accomplishing this task may be harder than he initially thought.

Within the span of approximately 20 pages, Elias Zanbaka takes us on a wild ride through the streets of Los Angeles and a Hollywood sound stage in this action packed short. In the opening scene, the reader is inserted into the chaos in a manner that is a tad jarring. Zanbaka’s style for this story is very much in “real time” and as such the events unfold quickly and a bit chaotically. As we see “the target” locked in his epic struggle to destroy the Earth, we also get a glimpse of what caused such a violent reaction in this man. For me, that reveal and then the eventual understanding of Schaeffer’s actions made for a thought provoking twist to end the story. A good quick read and an enjoyable story.