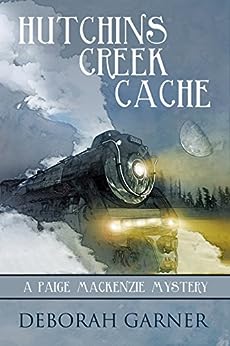 Hutchins Creek Cache is the fourth in the Paige McKenzie series of novels by Deborah Garner. The story takes place approximately three months after the close of “Three Silver Doves” and, Paige has accepted another field assignment for the Manhattan Post. This time she is bound for Hutchins Creek Colorado to explore and write a story about the history of steam trains and their impact in the area. Deciding on Hutchins Creek was partly due to its location on the Durango-Silverton train line, the towns family founding, and the cozy small town surroundings that Paige has become fond of. In the last three months, Paige and Jake have also grown closer and this locale will also serve as the perfect locale for a romantic “workcation” with her Wyoming cowboy.

Upon her arrival, she is immediately taken in by the Hutchins family in all their charm and quirkiness. After touring an old train station turned museum she befriends the daughter of the owner who spends most of her days playing in the train yard at the rear of the museum. Sam’s domain is an interesting place where vintage train cars are displayed including the famous “Morning Star” which has fallen into disrepair and needs restoration. Paige learns that there is currently a collection in process to raise the funds to bring this car back to its former glory and considers giving the cause a mention in her piece for the Post. Sam also shows Paige her most prized possession, a 1926 gold Double Eagle coin which she lovingly refers to as which she calls her treasure or her “bird”. Immediately seeing that this may be a valuable find, Paige and Jake do some research but are met with interesting reactions, both from a neighboring coin dealer and the officials at the Denver Mint. Paige of course cannot let this go and her and Jake are brought into another mystery. Together, the pair find themselves eyeball deep on a decades old mystery that turns into one wild ride for them both.

This is the first book where Paige and Jake have been together for the entire story and I must say, I am loving this duo. Their dynamic is sweet and doesn’t detract at all from this story. True to form, Garner has written a novel that is hard to pigeon hole into one specific genre, but that is what sets this series apart from any other that I have read. “Hutchins Creek Cache” has elements that remind me of an old Western, but there is also the cozy mystery feel and the slow burn romance between the main characters that leaves a hint of intrigue. At the close of the book, Paige has a choice to make – does she stay in New York or move to Jackson Hole to be with Jake. I, for one am definitely interested in seeing how the future shakes out for these two not to mention how many more mysteries await.