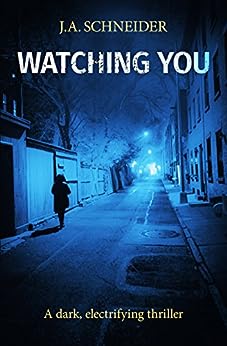 Full disclosure – I was provided an ARC of this book by the author but voluntarily chose to write a review.

“Watching You” is the newest installment in the Detective Kerri Blasco thriller series by J.A. Schneider.  Blasco is a New York City cop who has seen more than her share of bad stuff, so when she is called to the scene of yet another murder in the Big Apple, it’s business as usual. Arriving at the scene, what awaits her is the stuff of nightmare. A wealthy, well liked, socially conscious young woman has been callously murdered. Shot execution style with a single bullet to the base of her skull the team has very little to go on. With nothing taken and no prints to aid in identifying the murderer the team has only two similarly shocking clues. Pinned into her back as if she were a human bulletin board is the eerie message “WATCHING YOU” while a recently received text on the victim’s cell phone also displays this chilling text message. The investigation takes Kerri and her partner/boss Alex all over the city; from the upscale surroundings of her parent’s home, the semi renovated home/gallery of her paraplegic ex fiancée to the homeless mission where the deceased spent so much time helping those less fortunate, Kerri and Alex work tirelessly to get a break as more bodies are discovered. When the killer sets his sights on Kerri, the situation becomes dire. With time running out, the team must apprehend the culprit or his next victim may be Detective Blasco.

Having not previously read the first two books in the series, I was a little concerned that I would be at a disadvantage with previous plot quirks or character back stories. I was surprised to find that while technically the third book in the series, “Watching You” is written in such a way that it can be read as either a standalone novel or part of the larger series. The pace is fast as we jump immediately into the mind of the killer and witness the murder of Leda Winfield through his eyes and within his thoughts. As the witnesses start to come forward, clues and theories take shape, and bodies pile up, it was clear that this was not going to be an easily closed case. At the climax of the book, I caught myself almost yelling “you’ve got the wrong guy!” as the killer’s identity became more and more obvious to me.   I feel also compelled to note that the characters, whether they be suspects, witnesses or members of the force were written is a way that made them believable and easy to picture. In fact, there wasn’t a character in this book that I did not believe. Some authors tend to lean toward stereotypes when writing certain characters or situations, I did not see that with Watching You.

Another item of note that really stuck out for me was Schneider’s focus on Leda’s activism and assisting at the homeless mission. The mission scenes and the welcoming atmosphere depicted put a compelling face on a problem that is far too prevalent in our world today. I love how Kerri also spends a fair amount of time at the Mission during her investigation, which reminds the reader that while often forgotten or faceless, those who are struggling in their situations are people too and often have much to contribute.

All in all, a great read and one I am sure to revisit again in the future. While “Watching You” was my first read by this author, I am sure it will not be my last.