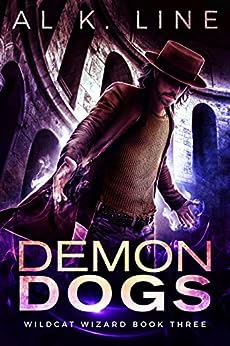 Demon Dogs is the third installment in the Wildcat Wizard series by Al K. Line and takes place not too far after the close of Faery Dust. From the opening scene, we see that life has not slowed down in the slightest for Arthur. In fact, it the pace is so frantic that not even Death himself can keep up with “The Hat”. Having completed another harrowing yet successful job, Arthur and Vicky tie up a few loose ends and return home, but upon their arrival, they are greeted by Ivan and George. The Vampire Shifter and leader of all baddies in the area has been waiting for Arthur. His request is bizarre, but strangely compelling because he requires The Hat’s services locating his sister. Taken from the family by Merrick’s father when she was just a little girl, it’s been years since Ivan has seen or spoken with Avisha. With little to go on but a name and the belief that she is still alive, Arthur and Vicky travel to the gritty shifter underground in the North as they attempt to locate the proverbial needle in a haystack.

Demon Dogs is jam packed with action, insanity, twists and all sorts of craziness as this series just keeps getting better and better. Arthur really has more than he can handle in this installment, but he manages in perfect “Hat” style. Vicky’s home situation is explored in more detail as is Ivan’s enigmatic past and how he came to be the gangster he is today. Sasha of course factors prominently in the story as her and George are growing closer and some of their activities raise Arthur’s eyebrows. Of course, Cerberus always remains at the fringe of the action with a watchful and vigilant eye.  As far as potential future plot lines go, Demon Dogs blows the door wide open. Based on the newest developments I am eager to see what the future holds for many of the characters as they adapt to new surrounding and situations and make life choices for good or for ill. If Arthur doesn’t exhaust his lives soon, we are sure to be treated to many more adventures.