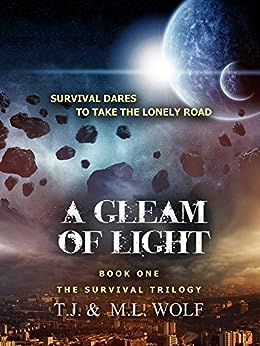 Full Disclosure – I was provided a free copy of this book by the authors but have voluntarily chosen to write a review.

“A Gleam of Light” is the debut novel by the author duo T.J. and M.L. Wolf. The story follows Una Waters, a Native American woman.  As a child, she along with the other passengers and crew of America West Flight 564, encountered what can only be described as a possible UFO sighting at close range while traveling with her family from Dallas to Las Vegas.  Now as an adult working in Washington D.C. the event so changed her that she has never traveled by air since. When she receives a message from a childhood friend urging her to come back to the Hopi reservation where she grew up, she feels compelled to return to her home and try to help the villagers with their problem. There has been an increase in military activity around the Sacred Peaks surrounding a discovery in one of the caves. The Hopis maintain that the site should be left alone as part of their history and may contain Hopi artifacts. The military does not agree and has set up a perimeter around the peaks that they are defending with deadly force as they dig and explore for an object they are only describing as “a mysterious power source.” Una hopes she can bridge the gap between the villagers and the military to bring the conflict to an end peacefully. Obtaining proof of the site’s historical significance for the Hopis would qualify the area for protection under the law but it will not be easy. Una will need the help of many if she is to accomplish this task.

When I was first contacted by the authors, I wasn’t sure how I would feel about the story. I have read my share of fiction but have never really strayed into the realm of aliens or UFOs before.  After poking around on the authors’ website, I stumbled on the trailer for the book. I didn’t even know that book trailers existed, so this was definitely a neat thing to see. Suffice it to say, the trailer grabbed my attention and I happily accepted a copy. Overall, I loved the story of the prodigal child returning home after many years, not knowing if she will be accepted or shunned. As a Hopi, she grew up there and belongs with her people on the reservation but having spent the last two decades in the “white man’s” world working in the US Capitol, she fears that she may be looked upon as not to be trusted. Carrying terrifying memories of flight 564 along with her parents’ tragic passing, Una must face more than just the military issue upon her return to her ancestral home as she realizes that she must embrace her heritage no matter what others may think.

Using the America West incident, which is a documented possible UFO encounter, as the backdrop of the novel, the authors have created an enjoyable read that is part “Indiana Jones” in places with also a bit of “Twilight Zone” tossed in for good measure. While not fast paced, A Gleam of Light moves at a pace that will keep the reader’s attention and interest. For me, this was one of those books where you cannot let your guard down and assume that things are being described just to set a scene or to tell a back story. As they story progresses, Una learns that she wasn’t the only one affected by the events of so long ago and finds comfort in this knowledge. Overall, this is a solid first novel from a pair of new authors. Being the inquisitive person I am, I found myself Googling many different places and ideas in this book which served to provide additional information that I was not aware of. For me, reading a novel that is a good story is great, but one that makes you think and maybe even learn something new while reading a work of fiction is even better.  After reading “A Gleam of Light”, I am looking forward to book 2 in the Survival Trilogy – “The Dragon’s Glare”. Whether it is a continuation of Una’s story or another situation entirely, I am certain that I will not be disappointed and may even learn something new along the way.