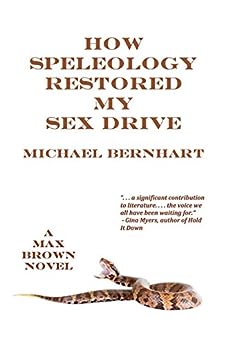 Full Disclosure, I was given a copy of this book by the author in exchange for an honest review.

“How Speleology Restored My Sex Drive” is the third book in the Max Brown Tetralogy by Michael Bernhart. The story sees Max Brown and his wife Sally later in their life journey residing in Switzerland and raising their twin 9-year-old girls Mary and Margaret. After a spate of birthday parties revolving around treasure hunts, the twins decide that they must go on a treasure hunt of their own. Max is very hesitant to indulge the girls due to his past with this very subject but reluctantly agrees to return to the United States to look for buried treasure in North Georgia where he figures it will be ‘safe’.  After a visit with their “crazy” Uncle Skeeter, the girls shift their focus from the initially selected target, to a hidden Confederate gold stash that is said to be located somewhere up in the mountains. Unfortunately, they are not the only ones looking for this gold and before Max and Sally know it, the twins have run off with Uncle Skeeter to hunt on their own. As the increasingly frantic couple search for their girls, they encounter several of Skeeter’s Klan acquaintances who are also dead set on getting their hands on the loot for the purposes of financing a new Southern revolution. If that weren’t bad enough, the Browns must  deal with shady cops and enlist the help of several unique characters including a pacifist Vietnam Vet and his flower child girlfriend, a Forest Ranger with a very unique nickname and what is quite possibly the region’s only black resident to get their children back in one piece.

Set in the mid 90’s in the heart of Dixie, “Speleology” is a fun story that had me laughing out loud on several occasions. The racist tone of the Klansmen and a few town residents added to the narrative and gave the reader an idea of just what type of people the Browns were dealing with as they sought out the location of their children. The story is crafted in such a way that the potentially offensive characters are portrayed as so over the top, that made it almost impossible to be offended by anything going on in the book. The excerpts from “M&M’s Guide to Treasure” regarding the rumored stashes, their history and possible truth was an added bonus. Having Googled a few of the sites and event noted in this fictional journal, it seems that there may be some truth to Confederate gold somewhere in the Georgia mountains.

Having only read this book, which is the third in the Max Brown Tetralogy I ended up taking a lot of things at face value. For instance, Max’s previously disastrous treasure hunting foray was briefly touched on as were Max and Sally’s prior military experiences.

I’m sure these areas were possibly explored in previous installments. Rather than letting this little detail trip me up, I just took it as dropping in on a season in one’s life where we are only seeing this moment and not everything leading up to it. That being said, after reading “Speleology”, I am definitely eager to read the other three in this series.

If you are a fan of the madcap, crazy storylines and offbeat humor that is very reminiscent of the Serge A. Storms novels by Tim Dorsey, you will love this book. If you are thin skinned, have no sense of humor or are easily offended, you should read it anyway as this may just cure you.