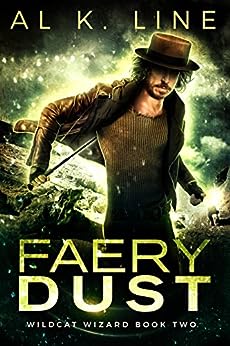 The Hat is back

Faery Dust continues the story of Arthur “The Hat” Salzman shortly after the close of “Blood Moon”. Arthur just wants to take it easy and try to get some rest, but Vicky has found herself with a rare week free of the husband and kids and is dying to accompany Arthur on her first job as his official “sidekick”. It seems that Vicky’s wishes may become a reality when Arthur is visited by Elion the fallen elf. The job: locate and retrieve the Raeth Naeg – a magical belt fashioned in part from the mythical sword of Beowulf. If Arthur succeeds, he (and Vicky) will be rewarded handsomely. If he fails, he will most likely have one vindictive fallen elf to deal with. The more Arthur delves into his quest, the more he realizes that nobody knows exactly what the Raeth Naeg’s powers are. This mystery only makes the object that more desirable. While getting the Raeth Naeg proves eventful enough with Vicky tagging along, delivering the item to Elion may be harder to do as he is nowhere to be found.  Cerberus, Mikalus and vampire family and Elion’s siblings from the Nolands are also lining up for their shot at the Raeth Naeg and The Hat one way or another.

Poor Arthur has little down time in this follow up to “Blood Moon” and our resident insomniac wizard is stretched to his limits as he undertakes his newest job. With extreme exhaustion bordering on narcolepsy, Arthur really is fortunate to have the women in his life around more than normal in this episode whether he believes it or not. Even with Vicky trying his patience and almost getting them both killed on at least one occasion, she also proves her value when confronted with the vampires. As she shows The Hat, a mom can handle anything. The shifters make a return in an unusual way and, of course, if magical artifacts are involved, Nathan and his Cerberus goons will never be too far behind. I love the literary theme that’s developing with this series, from Tinkerbell’s wand to Beowulf’s sword the artifact that may turn up next is anyone’s guess.