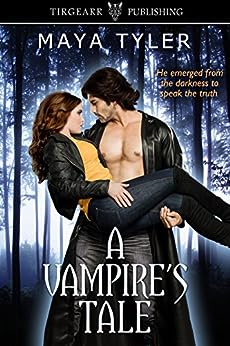 Full disclosure, I was provided an advanced copy of this book by the author in exchange for an honest review.

Marisa Clements is not your average romance novelist. An introvert by choice, she is rarely seen outside of her house; her only companion being her laptop and her vampire romance novels.  With a nonexistent love life, she relies on her vivid imagination as fuel for her craft.  Being a skeptic writing about the paranormal doesn’t make the task easier, but it at least pays the bills. Enter Corgan Halton, the “fictional” lead in her newest vampire yarn. Dark, dashing, tortured, passionate….and standing in Marisa’s apartment. But how can this be? Vampires aren’t real, right?

Corgan’s appearance in Marisa’s apartment wasn’t by chance. He is aware of her vocation and many other aspects of her life. Corgan is tired of the world’s misconceptions of vampires and wants to set the record straight before ending his existence on Earth. By having Marisa tell his tale, Corgan can do just that, but this also places Marisa in a danger that she cannot even begin to fathom. Corgan’s attempts to protect Marisa from harm will require assistance from the wizards and his maker as Marisa finds herself immersed in writing her own story.

As a rule, I am not a big fan of romance novels, basically because I read more than my share of them in high school. I noticed a pattern, a basic formula, and I got to the point where I could read a chapter or two and tell you how the whole sordid ordeal was going to shake out. There was always the spoiled rich aristocratic virgin (a must have), an “enter rogue of some sort here”, an arranged marriage, or kidnap or other forced interactions with said rogue, with the result being her captor capturing her heart, blah blah blah. It truly was enough to send me screaming for the horror genre hills after a few years.

With that being said, I was a bit reluctant to give “A Vampire’s Tale” a try, assuming that I would fall right back into the cookie cutter romance mold and be thoroughly bored.

I was pleasantly surprised.

As I read through, it became more apparent that, “A Vampire’s Tale” was less about the “romance” and more about Corgan’s life and his mission to tell his story to this exceptional human. More of a paranormal or urban action fantasy the story moved quickly; so quickly in fact that I devoured this book in less than a day. The romance was there, but did not resemble the mold that I had come to abhor in years past. Even the intimate scenes were done in such a way that was tasteful and didn’t have me fanning myself and thinking that I accidentally missed an X on the cover.

So, much as Corgan made Marisa believe that true vampires do exist, Maya Tyler has managed to show this jaded romance skeptic that there is still such a thing as a sweet love story. Four well deserved stars. If Ms. Tyler’s other stories are anything like “A Vampire’s Tale” I may become a repeat reader.