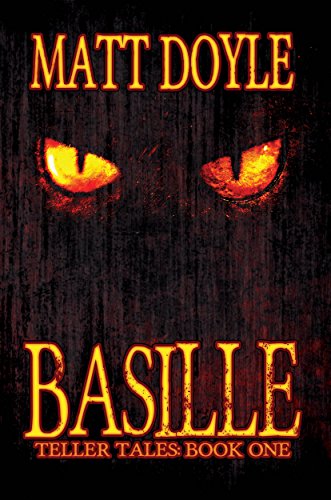 Simon Teller is your typical 12-year-old. Average in school, he would rather spend his time with his best friend, Daniel playing online video games and avoiding the watchful eye of the local homeless teenage girl referred to only as “She Who Watches.” One day, while zoning out in history class, Simon daydreams that he is in a strange cave with a six-foot-tall fennec fox that’s a curious mixture of sinister and juvenile. When Xera visits him at school and invites him to return to her world to play a “game”, Simon realizes that this is not a dream. The game is real and so are the consequences.

Basille is a departure from Matt Doyle’s other project, the Spark Form Chronicles, but that should in no way deter you from reading this one. Set more for a YA Audience, this book can be read by all ages. I love the concept of Simon Teller being transported inside a living video game of sorts and having to rely on his wits and other team members to survive the game. Unlike video games though, if you die in the game set up by Basille (the cat womanesque game master who it seems to oversee Xera’s world) you are dead in real life. The game itself is part Resident Evil, Part Call of Duty and something entirely different. There was very little “set up” to bog down the pace of the story and once Simon was transported to Xera’s world to begin the game, the action was pretty much nonstop.

Overall, I really enjoyed Basille and am looking forward to many more twists and surprises in the upcoming installments as Simon Teller’s journey as the Door Keeper seems to have only just begun.