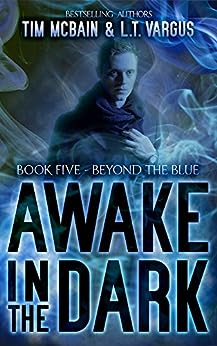 Sometimes the end is not the end

“Beyond the Blue” is the fifth and final installment in the Awake in the Dark series by Tim McBain and LT Vargus.  Still trying to recover from Glenn’s murder and the rather messy demise of Riston Farber and his minions, Jeff attempts to move on. But when moving on comes on the form of Ms. Babineaux tapping him as basically Farber’s replacement, an icon of the League, Jeff withdraws to the only person who he feels he can truly trust.

Spending more and more time on the astral plane Jeff and Amity grow closer. But after an experiment with unforeseen consequences, not even Amity and the other world provides comfort any longer. Jeff finds his grasp on reality slipping as he is set on a collision course with the end, whether he is prepared or not.

Throughout the series, I have followed Jeff Grobnagger’s journey from socially inept recluse, to unknowing participant turned pawn in a game he never knew existed and finally a person so broken that he is ready to give it all up and just fade into oblivion. I thought Jeff was pretty unstable in Back in Black, but in Beyond the Blue Jeff is just downright scary. Relegated to spending time in the astral world with Amity or holed up in his home with his cats and figments of his imagination, Jeff is seriously at the end of his psychological rope. You would think with everything that had threatened him in previous books eliminated Jeff would be on top of the world, but the price he paid to get to this point may have been too much. After his initial encounter with the Blue, Jeff retreats into himself, only leaving the house when necessary and existing solely on hot showers and junk food. When Glenn, shows up things get even weirder in a sort of “Beautiful Mind” sort of way.

For as many ways that McBain and Vargus could have resolved this weird roller-coaster series, I am glad that it ended the way it did. I saw a lot of myself in Grobnagger with regard to his reclusive lifestyle and unwillingness to engage in social interactions so I was sort of rooting for the guy. Leaving the Grobnagger saga on a note such as this leaves the reader with a glimmer of hope for even the most tortured soul.  While I understand that this is the end of Jeff’s story, is it really?