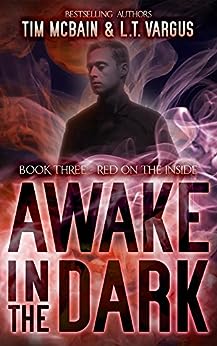 Red on the Inside, the third in the “Awake in the Dark” paranormal series is very much a transition time for  Jeff Grobnagger. After proof of Riston Farber’s recent return to the living, Jeff seeks Glenn’s help to sort things out. Together they experiment with various ways of getting to the astral plane to seek Amity’s help.  Once there, they realize that Amity isn’t the only person inhabiting this realm with the consequences turning severe and final.

First of all I must say that this book should not be read without previously reading “Fade To Black” and “Bled White”. If you  haven’t followed this series from the beginning, you will be totally lost and probably not enjoy this book at all. If you have gotten this far, then you are well acquainted with the major players and themes and will find this an interesting progression in the events to date.

I say interesting because I did have a hard time getting into this one. My main issue was that Bled White pretty much ended with Jeff Grobnagger and Riston Farber face to face in the League of Light Headquarters and Jeff pretty much running for his life. The majority of Red on the Inside basically amounted to Jeff and Glenn having a big bro fest, getting drunk and seemingly doing nothing to track down or stop a person pretty much intent to do them both harm. When they finally get serious about finding Amity in the other realm and seeking her help or get her to return to the physical world the book is more than half over. Even with that being said, once Glenn and Jeff both arrive in the other realm, they encounter one hell of a “welcoming party”. The events that follow make is clear to Jeff that as long as Riston Farber exists, he will never be safe.

This is probably my least favorite book in the series so far but then again “Bled White” is a hard act to follow. Even with that being said it does its job to further the story and set up for the next book. It will be interesting to see how Jeff will handle Riston Farber now that there is no mistaking his intentions even if his ultimate motives are still unclear.