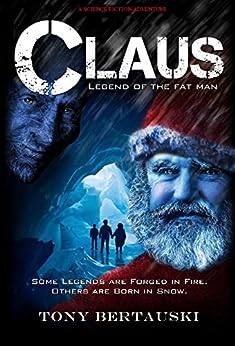 Claus (Legend of the Fat Man) by Tony Bertauski takes the popular secular Santa Claus myth and provides it with a back story like no other.

Nicholas, Jessica and Jon Santa are on an arctic expedition to the North Pole. The family has given up all to take this once in a lifetime adventure. When their guides abandon them in the middle of a raging blizzard the family is separated however are rescued by differing factions of the local inhabitants. Jessica and Jon are spirited away by a band of elves with leaping reindeer to an underground warren of sorts led by the elderly Jocah. It is here, that they learn that this band of elven are constantly on the run from ‘the Cold One’ (real name, Jack) and live a vigilant, nomadic life relocating frequently to avoid capture and return to  Jack’s fortress. Nicholas on the other hand was retrieved by the Cold One’s followers and is currently in the lab of Claus, Jack’s brother as a specimen of the warm bloods on the planet. Jack’s ultimate plan is to turn Nicholas into a human weapon of mass destruction and send him back to civilization to wipe out the warmbloods thus returning the world to the elven race.

The first thing I need you to understand about this book is it is not a warm, fuzzy, “Miracle on 34th Street” type Christmas story. If you are looking for red rider BB guns, sugar plums or Whoville inhabitants, you probably shouldn’t read this book. If you are open to a fresh speculation on Santa Claus, Jack Frost, reindeer, elves and knock down drag out family feuds then this book just might be for you. Bertauski’s North Pole is a stark place filled with technology, danger and one guy hell bent on the destruction of anything and everything that he feels has done him dirty. Jack can be described as a textbook villain on the surface. He is a bit deranged, a tad damaged and has one hell of a sadistic mean streak. I guess if I could turn people to ice and shatter them with just my touch I may be tempted as well. The story behind why he is the way he is, I feel, is the true issue at hand and one that drives the events of “Claus.” The ending, while not totally unexpected, warmed my heart and gave me hope for redemption for even the coldest of hearts.