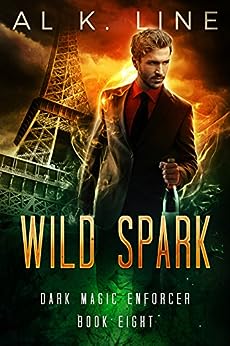 Full disclosure, I was provided an advance copy of this book by the author as part of his “A-Team” in exchange for an honest review.

Wild Spark picks up some time after the close of Dead Spark. Faz Pound has dealt with Amber’s treachery in a way that will most likely leave him scarred for years to come and just wants to heal and move on with his life. What better way to start afresh and leave the past behind? Getting married to Kate sounds like just the thing. The couple jets off to Paris for a week of bliss leaving Mithnite in charge of their home and ready to forget the hidden world for a short while.

After being greeted at the airport by a troll and upon checking into a hotel teeming with all manner of hidden, Faz and Kate decide that while they may not be able to leave the world behind, they will still make the best of their honeymoon.

Then all hell starts to break loose. First with a strange party invite hurtled through the window of their hotel room. This is less of an invite and more of a totally gruesome “come or else”. Initially Faz and Kate attempt to ignore the foreboding request but when Kate is whisked away suddenly, Spark realizes that there is nothing to do but attend the birthday party of “Queen Morag”.  Once at the soirée, Faz and Kate meet privately with the old witch and are given an intriguing proposition: Rescue Morag’s soul from the person who snatched it and she will give them the secret to Kate becoming fertile again. So there seems to be no rest for our favorite enforcer as he sets out to retrieve Morag’s soul. The deeper he gets into his international quest, the more he realizes that (as usual) things are not what they seem and all parties involved haven’t been entirely truthful. Will the ultimate price of Morag’s “help” be something that Spark will be willing to pay?

For as short as this installment in the Dark Magic Enforcer series was, there was still so much packed into it. I loved the idea of Kate and Spark getting some “alone” time with no distractions, especially after the events that transpired in Dead Spark. It was nice to see Faz travel out of the confines of Cardiff for something other than murder and mayhem (at least initially). I also liked how we got to see a new side to Madge. It makes you wonder what else the gruff old lady has up her sleeve other than the most amazing fry ups on the planet. Mithnite is also starting to come into his own. From the novice fan boy of a few books ago to one of Spark’s closest allies now, Mithnite is evolving. I was also impressed with Mithnite’s “new” abilities. I mean, are they new or has he been holding out on Spark along with most his friends and family?  The ending brings us practically full circle to the “Black Spark” that we were introduced to in Dark Magic Enforcer book 1. Powerful and dangerous, yet vulnerable and afflicted. I hope that the sacrifice for Spark was not in vain and am looking forward to the next installment to see what happens next.