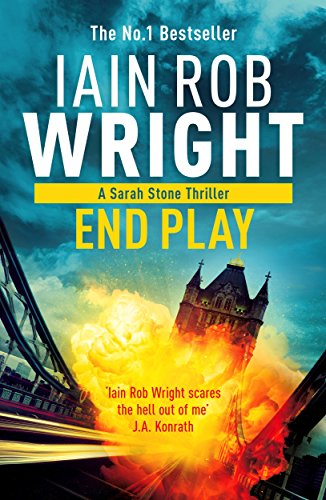 Full disclosure – I was provided a copy of this book by the Author as part of his Advanced Reader’s group.

End Play is the third and final novel in the Major Crimes Unit trilogy of books by Iain Rob Wright. Still reeling from the events of Hot Zone – the kidnapping at the hands of her father and the sudden reappearance of her deceased husband – Sarah Stone finds herself in pursuit of the most prolific serial killer London has seen since Jack the Ripper. The Flower Man, as he is called, takes his victims and turns them into living gardens, and Sarah will stop at nothing to bring him down. When a terrorist attack on a major London landmark interrupts her pursuit, Sarah comes face to face with her own personal “Boogeyman”. With more prominent London landmarks in the cross hairs, Sarah must choose what is more important – saving a life or saving her country.

Iain Rob Wright proves once again that he can write just about anything. While the MCU and Sarah Stone are departures from many of his other novels, this does not mean that they are in any way inferior. Stone is a strong female protagonist that faces the scars and demons of her past with a strength that most people only wished they had. The pace of this book can only be described as “breakneck”. From the first chapter to the last word, Wright conveys an urgency that is palpable as a country is thrown into chaos with no end in sight. I understand that this is to be the finale of the Sara Stone novels but with all good crime stores Wright leaves us with the knowledge that all is never well. The ending is brilliant, and a perfect tidbit to leave the reader with a cold tingle down their spine and a hope for a revisit in the future.