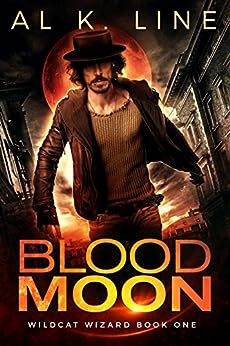 Meet Arthur “The Hat” Salzman. A well-known wizard both within the magical and non-magical communities. When not obtaining obscure items of an arcane nature, The Hat is an insomniac single father of a teenager. After Arthur accepts a job to retrieve an unknown object stored inside a bag, complete with magic wards and a warning not to look inside, things start to go sideways.

It appears that Nigel isn’t the only one wanting to get his hands on the item, some are even willing to kill for it. The more Arthur tries to off load the package and collect his payment, the deeper he gets and the more he learns that this bag houses an ancient evil that may better be left undisturbed. When his private and professional lives become intertwined with almost disastrous certainty, Arthur must rely on more than his wand and Faerie Godmother to deal with the contents and fall out of the mystery package.

Blood Moon is the first book in the “Wildcat Wizard” series by author Al K. Line and it is definitely one wild ride. From the opening scene where we meet Arthur practically hogtied to a speeding car in an attempt to evade what will be a seemingly never ending stream of baddies of all shapes, sizes and persuasions to the closing lines, the story starts fast and hardly lets up for a second. Arthur is the perfect “good” bad guy; a gangster with a heart and a sense of justice. A doting father who will stop at nothing to protect his daughter, George.

Arthur quickly grew on me because of his humanness which is a bit of a departure from the wizards and witches of Line’s other Urban Fantasy novels. Being a 40 -something with a teenage daughter, if you take away the magic, Faerie Godmother and the gift she bestowed upon him, Arthur could be your next-door neighbor. Just a regular guy trying to get on in the world, with friends and enemies; and like some of us, he finds it hard to tell the difference at times.  Vicky the spastic hacker was a great bit of comic relief. One of Arthur’s closest friends, Vicky knows almost all of Arthur’s secrets, including Sasha and longs to be a part of his magical exploits. I would have to say that most of my loudest chuckles were at the expense of the sidekick fan-girl. The usual suspects are also present regarding magical, mythical and undead things, however they have been slightly re-imagined in such a way that will take your ideas about vampires and other beings and turn them upside down.

A great start with a brilliant new cast of characters. I look forward to delving further into The Hat’s world and meeting more friends, enemies and otherwise in the upcoming stories.