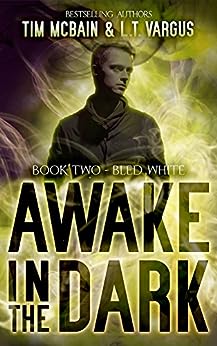 Bled White continues Jeff Grobnagger’s story immediately after the close of “Fade to Black”. Waking up in a strange sort of prison after having been kidnapped by Rison Farber, Jeff tries to come to grips with the events of the past few days. Who is this Riston Farber guy? Why did he abduct him and why does he apparently want him dead?  Things get weirder when Ms. Babinaux releases him and then he discovers Farber, burned to a crisp in the middle of nowhere.

So, now the guy who imprisoned him has turned up dead. Sounds good, right? Problem solved.  Then his body goes missing. Who would want a burned-up body of a fanatical spoon flinging cultist? Attempting to answer these questions, Jeff ends up joining the League of Light and working closely with Louise and Ms. Babinaux to try to figure out what is going on. As Jeff gets deeper and deeper into the process of joining the League and associating with one of Farber’s closest associates, he learns almost nothing. As the initiation rituals become more and more bizarre Jeff gets drawn on a path that leads to a dark well and an uncertain outcome.

The best thing about “Bled White” is that it starts good and get better and better with every turn of the page. The blackouts are gone and replaced with the “white world” … an enlightened state that keeps Jeff conscious if not all the way present. I would say that some of these white out episodes are very comical as it appears to the world that Jeff is simply high. These sequences also provide important information for Jeff to digest in his quest for answers. Ms. Babinaux is intriguing as I can’t tell if she is helping Jeff or pushing him toward an ultimate end. As usual with this series the ending is a wild cliffhanger that will have you eagerly reaching for the next book in the series. Jeff is left right in the middle of a WTF moment, if not completely exposed and in danger. An excellent segue into “Red on the Inside”. This series has turned into one that I am eager to continue.