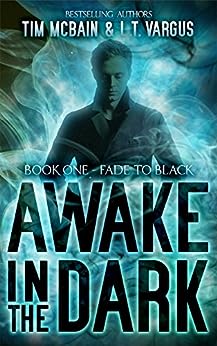 Who is Jeff Grobnagger? And what does the League of Light care so much?

Jeff Grobnagger is not what you would call your average every day guy. He’s sort of reserved, closed off and anti-social. He’s also prone to falling out in a seizure like state where while he’s out he finds himself hanging by a leg in an alleyway only to be brutally murdered by a mysterious hooded man. Sounds like a doozie of a nightmare but for Jeff, this is life. When he falls out in the middle of the grocery store he catches the eye of a strange man named Glenn who befriends him. Through Glenn, he learns of a secret society who may want him dead, a mysterious Ms. Babinaux and an undercover private eye named Louise who may have more than work in mind where Jeff is concerned. Oh, and did I mention Glenn’s missing daughter Amity and a possibly occult type thing all going on?
Yeah.. there is a lot going on in this book and for most of it I couldn’t help but think, “What the hell did I just read??” As Jeff starts to figure out the dynamics of his “dream state” things get weirder and weirder, culminating in an ending that will leave you screaming “WHAT!!” and reaching for the next book in the series.

Fade to Black is disjointed and a bit disturbing, with a cliffhanger ending to rival the weirdest paranormal tale. A wild ride that has me looking for some answers in the second book.