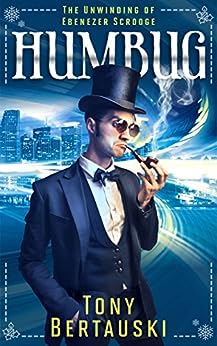 Full Disclosure – I received an advanced copy of this book from the author in exchange for an honest review.

Not your Grandmother’s Christmas Carol

“Humbug” takes the classic Dickens Christmas Carol, dresses it up and moves it into modern (if not future) day.  Scrooge and Marley are the owners of tech company Avocado, Inc. What began as a startup three decades past has now turned into a very successful multi-million-dollar company the likes of a Google or Apple. When Marley dies suddenly, Scrooge is left to helm the company alone but there is one problem with that as Eb Scrooge has not been seen physically in public for almost a decade. Locked away in what has been called “Castle Scrooge”, Eb’s public persona is a carefully crafted image transmitted from the relative safety of his home. The ultimate recluse, Eb is shocked to find himself visited by what appears be Marley’s image sitting in his bedroom. After a very surreal chat with his dead friend, Jacob leaves him with a gift. Each Christmas this “gift” returns to plague him with scenes of present and past, leading to the ultimate unwinding of an already fragile mind.

Humbug is the fourth in a series of Christmas retellings by Tony Bertauski, and thus far is the only one I have read. That being said, this title works well as a standalone novel. I really liked the technology rich aspect of the story with Castle Scrooge being linked up to the Avocado offices halfway across the country. After all, this is not unheard of as many people telecommute… just maybe not the way that Eb does. The droid technology and Scrooge’s ability to transmit his chosen image wherever he wanted to be without being anywhere at all was also really neat.  The placement of Castle Scrooge on the side of a mountain in Colorado led to some very vivid imaginings of scenery on my part. Beautiful and majestic, yet untouchable and remote, I could almost imagine this on a big screen somewhere adapted for the cinema.

To me this story was part Steampunk, part Bradbury with a bit of A Beautiful Mind tossed in for good measure. A very good read with an ending that will not disappoint.