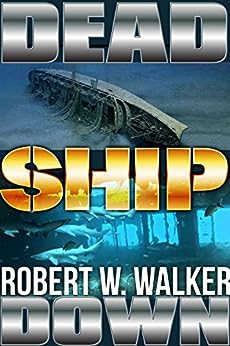 A fairly decent story, but could use a little editing

Throughout my life, I have found myself drawn to strange subjects as objects of extreme fascination with shipwrecks being right at the top of the list.  Having previously read Titanic 2012 and actually enjoying it after a rocky start I figured I would give this title a try.

Set in modern day, Dead Ship Down follows a dive team commissioned by the family of a prior diver, Thom Pritchard, to recover the body of their lost loved one. What awaits them on the ocean floor isn’t just the wreckage of a once proud ocean liner but something more sinister and possibly history changing. As the ship has already claimed more than a dozen divers over the years, the group faces forces beyond their comprehension as they attempt to complete their mission.

I have mixed feelings about this book in general. The good news is, I didn’t hate it and for the most part it was actually a pretty good story. The dive sequences were written in such a way that someone who has never donned scuba gear could understand them. There was plenty of history to give the story depth and flesh out the characters. In fact, the missing diver they were looking for was a previous casualty of the ship in 2015. I also enjoyed the flashback portion that describes the Andrea Doria and Stockholm’s collision course on the night in question.

What I didn’t like was what felt to me to be the last minute addition of the revelation of a possible conspiracy theory implicating several nations and less than ethical activities in the past. This just seemed to be too much to add to an already full story. Clocking in at less than 100 pages, I feel the story probably could have benefited from a little content trimming. The subtitle is “Something’s alive on the Andrea Doria” so I expected the paranormal aspect. The added conspiracy just seemed to be overkill.

I also noticed about halfway though that the number of typos, misplaced apostrophes and content errors increased significantly. There were a few sections where it looked like the author changed his mind, backspaced to do a revision, but left part of the original text hanging. I also noticed a section where the characters seemed to be confused and we had Jenna talking to herself, instead of the dead girl on the boat.  I did send a few of these up for review via the “Report Content Error” feature on my device but for the ones that I sent, there were easily two or three that I didn’t. It may not be a bad idea to go back through this title to clean it up a bit.

So a decent read that definitely fed my shipwreck fascination. With the exception of the one plot point that I didn’t care for in this particular book, (although I would love to see this aspect explored further in another story possible using this as the main story line and not a sideline plot twist) all of the other issues are easily fixable.