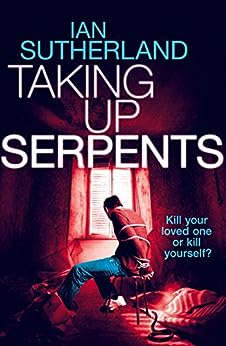 Full Disclosure, I was provided an advanced copy of this book by the author in exchange for an honest review.

Sutherland does it again!

Taking up Serpents continues the story of Brody Taylor, white hat hacker approximately 6 weeks after the close of “Invasion of Privacy”. Still reeling from the loss the events of the past few weeks including having his online identity compromised and almost being murdered at the hands of the Russian mafia, Brody attempts to move on and resume life in the real and virtual worlds. At the urging of friend and fellow hacker Victor Gibb, Brody applies for a position working alongside him within the GCHQ. If he lands the job, it would put him in the best position to track down the Vorovskoy Mir and gain a measure of revenge for the events of the recent past. Things take a turn for the worse when Brody finds himself the recipient of a death letter sent by another user of the CrackerHack forum. Did the Vorovskoy Mir succeed in knocking off another one of their most wanted list, or is there more to the story than meets the eye?  What Brody initially thinks is just the Russian Mafia knocking off a rival turns into something much direr upon gaining access to the computer of the dead hacker. Brody needs to work within and also around the confines of the law to stop an event whose reach would potentially have a global impact.

When you can pick up a book and feel like you’re catching up with old friends, that is the sign of a well written story. Taking Up Serpents was that book for me and because of that it was very easy to dive right back into the world of Brody Taylor and feel like I’d never left. From the main characters to the bit players, everyone had a part to play and all characters were unique in their own little ways. While the killer wasn’t much of a secret in this book as opposed to “Invasion of Privacy”, the mystery revolved around the why. It was interesting to see once again how the lines between Brody’s online persona of “Fingal” and his real life efforts blurred almost to the point of disappearing at times as the race to find and save future targets heated up. I also loved the angle of a possible terrorist plot that didn’t necessarily revolve around Muslim extremists. I feel that especially in this age, it is important for us to remember that extremism exists everywhere and not just in one corner of the world.

With all of the action, suspense and intrigue that basically defined “Invasion of Privacy”, I was really wondering how Ian Sutherland was going to follow it up. I must say that I was not disappointed and am eagerly awaiting the next installment so I can immerse myself in Brody Taylor’s world yet again.