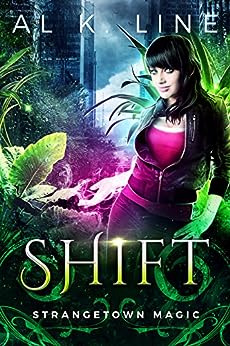 No Rest for the Strange

The Rift is gone along with the majority of its otherworldly inhabitants. Swift, Robin, Mack, Pumi, and all the rest of Strangetown begin the process of picking up and moving on. All Swift wants to do is go home, take a nice long shower and maybe sleep for a few days to recover from the most recent events. Strangetown, however, has other ideas and with the Rift gone, all magic experiences a Shift to right itself. Between all manner of heightened emotions, a strange out of control jungle growing seemingly everywhere and sudden violent weather related outbreaks there is no rest for the Strange. If that weren’t bad enough, Bluetz Skala has chosen this moment to unleash a reign of terror…and who is called in to track her down and stop her?

Picking up at Ground Zero immediately after the Rift has been eradicated, the action is soon to follow and there is very little down time. Swift is immediately drawn into the action and begins the hunt for her most dangerous adversary to date. The action is fast and fanciful in portions but always entertaining. Robin definitely factors a little more prominently in this installment as does Mack and Pumi.  There is also a bit of a heartbreaking piece of backstory that sheds some light on the dynamic that exists between Swift, Robin and their queen.

I must say that I really enjoyed this book in all its wild weirdness, and I’m looking forward to what challenges await Swift in the future.