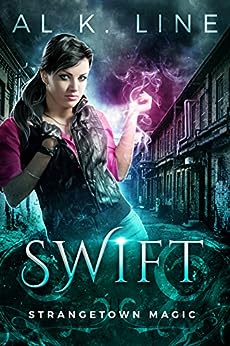 Things have been really crazy since the Rift… a magical explosion of sorts that tore through the town, leaving strange alien beings behind and scooping up unsuspecting Normal and Strange alike. After the Rift, the cops won’t even touch this place, so it’s up to Swift and the other Justices of the Queen Witch to keep the Strange in line. Strangetown definitely lives up to its name too with no end of Human and Alien. On a good day, you may see a few demons in the grocery aisle or even spot a Yeti or a Tree Sprite, but be warned – not all Strange are to be trusted.

This is Swift’s world; half a century and running and things definitely have been smoother.  After having narrowly escaped being pummeled by a troll riding elf (that vampire wasn’t so lucky) Swift is summoned to another job. There is a child killer on the loose and Swift must find him and deal with him.  Even the Strange have standards.

Sounds easy, right? Having set upon the task, Swift finds herself soon aiding the accused to prove his innocence and unravel the mystery behind the girl’s murder and the ever increasing gathering of elves at Ground Zero.

As far as first books in a series go, I liked this one but I must say that having come fresh off of the Dark Magic Enforcer series, I had a bit of difficulty getting into Swift and her world. While some of the concepts were similar there were also vast differences. I did love the idea of morphing, retro smack talking demons, and that shower scene was definitely something else! The additional dimension of the totally opposite but equally badass sister coming onto the scene also played nicely into the story. I think the main hindrance for me was while it moved fast it may have moved too fast, as it took a while for me to settle in and really start to enjoy the story. I’m hoping since this book sort of mainly revolved around a crisis waiting to happen that in book 2 we can slow down and take a leisurely tour of Strangetown. Something tells me though that if Strangetown is anything, it is not “leisurely” and while the pace may be less breakneck, there will still be plenty of fires for our Justice to put out.