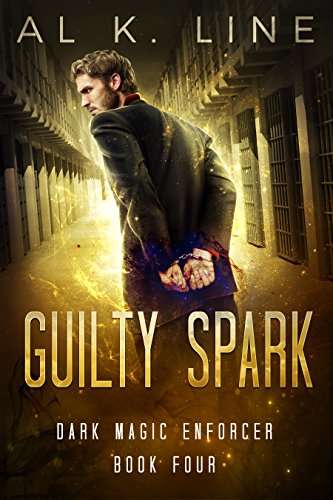 Guilty Spark, the fourth installment in the Dark Magic Enforcer series, resumes the tale of Faz Pound approximately one year after the close of New Spark. Having spent the last year in a Hidden jail accused of murder, Faz has been released pending sentencing to “get his affairs in order.” He has three days to unravel the mystery of a dead Faery and clear his name; but it seems that everything is conspiring against him to fail. From a marauding giant intent on killing Mage Rikka to a strangely familiar shifter dead set on murder, Faz has a lot on his plate with no signs of rest. The more he searches for evidence to clear his name, the more confusing things become. With time ticking down and a giant on his heels, can Faz unravel the web of mystery and save his life?

Guilty Spark is probably my favorite in the series so far. We see a stronger Spark emerge from the Hidden jail and immediately trouble ensues. The usual suspects are present, and throughout the story Spark begins to realize who he can and cannot trust. The pace of this book can only be described as “breakneck” – like a snowball slowly forming and rolling down the proverbial hill gathering speed and momentum to come crashing down in a frantic “hail Mary” of a conclusion.  The mystery behind his parent’s death also begins to unravel, as does the web of deceit surrounding this dark event in his life.

Guilty Spark is a definite must read and a brilliant set up to the fifth book yet to come: “Neon Spark!”